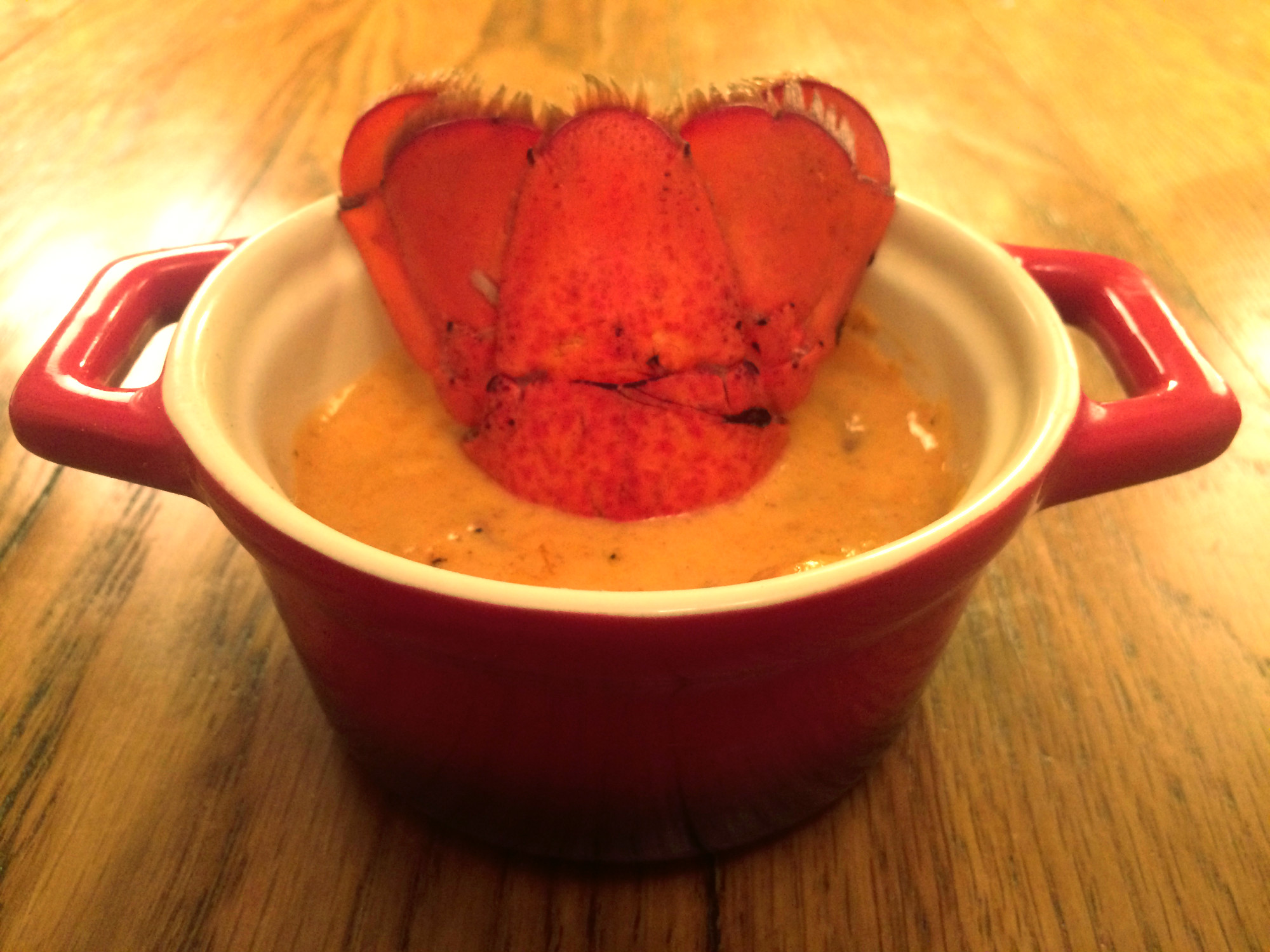 If you’re looking for a sublime lobster bisque recipe Julia Child should be your go to. While making Julia’s lobster bisque isn’t easy – it’s a laborious and messy undertaking –  the cooking process is exciting and educational. Setting the lobster shells on fire and watching the flames leap up in the air is a pulse-racing exercise and Julia Child’s rigorous approach to cooking lobster will leave you with an in-depth understanding of how to extract every last morsel of flavor from a crustacean.

Below is an overview of the eight step process to making Julia Child’s lobster bisque (click here if you want my full adaptation of the Julia Child lobster bisque recipe). I’ve tried to simplify and clarify the cooking process through my writing. If you make this dish, be sure to wear an apron, enjoy a bottle of wine as you cook and let me know the outcome.

Step One – Prepare the Mirepoix

Melt two tbsp of butter in a saucepan then add one cup mirepoix and cook slowly for six to eight minutes until the vegetables are tender and translucent but not browned.

Kill and cut up 2-3 lobsters (raw or slightly cooked) into large chunks with the meat still inside.  Fill the bottom of a casserole with two tbsp of oil and heat until the oil is very hot but not smoking. Add the lobster chests and legs and sauté, tossing and turning frequently for about 4 to 5 minutes until the shells are deep red in color.

Step Three – Simmer the Lobster and Pick out the Meat

When the lobster chests and legs are sautéed, lower the heat slightly and add salt and pepper. Then pour on 6 tbsp of cognac and ignite it with a match. Continue to stir the lobster shells and shake the dish until the flames died down. Then pour in 1 and 1/2 cups of dry white wine and add a bay leaf (and tarragon if you have some). Then fold in the mirepoix, 4 diced tomatoes, 1 clove of garlic and a pinch of cayenne. Add in the rest of the uncooked lobster (the claws and tails) then cover the casserole and simmer slowly for 20 minutes.  When the mixture is through simmering turn off the heat, remove the pieces of lobster from the casserole, let them cool then pick the lobster meat out of the shells. Set aside the lobster meat  in a bowl. Chop up all the shells and set them aside in another bowl. Then pour all of the cooking sauce (the remnants of the mirepoix, tomatoes, etc) from the casserole through a sieve and into the jar of a blender. This sauce will be combined with other ingredients in Step Five.

Using the saucepan from Step One, in which the mirepoix was cooked, bring the 2 cups of clam juice of fish stock and 2 cups of beef stock to a boil. Sprinkle in 1/4th cup of plan white rice (raw), stir then simmer for 20 minutes and set aside. Note: You can start Step Four while the lobster is simmering in Step Three to save yourself some time.

Drain the rice (reserving the cooking liquid) and place it, along with one half of the cooked lobster meat, into the blender which already contains the lobster cooking sauce (the mirepoix, tomatoes, etc from Step Three). Once pureed, remove the mixture from the blender and place it back into the rice saucepan. It will be used again at the end of Step Seven.

Add 6 tbsp of butter to the previously used casserole and heat until bubbling. Stir in the lobster shells and sauté for about three minutes, tossing and turning continuously. Then pour the mixture, including all the shells, into the blender and puree. You will need to stop several times and scrape the shells off the sides of the blender and back down into the blades. Puree for about five minutes. Once the butter and shells are well mixed, pour the mixture through a very fine sieve. Then set the lobster butter aside in a bowl and discard the shells. The butter will be used in Step Seven and Step Eight.

Heat 2 tbsp of the lobster butter in a frying pan until it starts to bubble. Add in the lobster meat and cook for about two minutes, tossing and turning and seasoning with salt and pepper. Pour in 2 tbsp of cognac and cook until the liquid has evaporated then scrape the lobster into the saucepan (from Step Five) containing the rest of the soup mixture. Let it cool uncovered, then cover and refrigerate or freeze.

A few minutes before serving, put the soup back in a pot and bring it to a simmer. Flavor with additional salt, pepper and cayenne if needed. Just before serving, stir in one cup of heavy cream and remove from the heat. Then stir in the lobster butter, one tablespoon at a time. Finally, pour into bowls and serve with a side of bread or croutons.

So that’s it!  My eight step lobster bisque recipe Julia Child – style.  I recommend serving this delicious lobster bisque with Veuve Clicquot champagne or a nice White Burgundy, such as a Meurault, Montrachet or Pouilly-Fuisse which will nicely compliment the rich, creamy nature of this dish (for more detailed lobster wine pairing recommendations, click here).