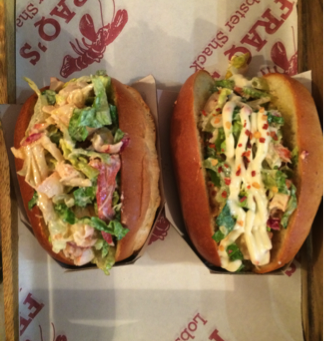 Thanks to a recent proliferation of lobster eateries in London, Brits can now capture the taste of the New England coast without even setting foot outside the capital.  But what should you look for in a good lobster roll and where are the best lobster rolls in London?

A good lobster roll is comprised of four components – butter, bread roll, lobster and dressing. The lobster meat should be served cold and lightly dressed in mayonnaise or a drizzle of melted butter.  The roll should be served warm and griddled in butter until golden brown.  In Maine, soft split-top buns are used. Spongy brioche bread can be an acceptable substitute.  The ratio of lobster to bun is also critical.  The roll should be stuffed to overflowing with chunky lobster meat.  That meat should come primarily from the claw and knuckle of the lobster, which has a more tender texture than lobster tail meat. Additional garnishes like lettuce, celery and spices are not out of the question but they should always compliment and never overwhelm the lobster.  It goes without saying that the lobster should be as fresh as possible (in Maine, many lobster shacks are built right on the wharves where lobster fishermen unload their daily catch). Finally, the roll should be served in a casual setting – ideally a rustic shack with stunning coastal views.

Where To Get The Best Lobster Rolls In London

While no London restaurant will be able to offer you an ocean view, B.O.B.’s Lobster, Fraq’s and Smack Lobster Roll Deli are three London restaurants that will serve you crustaceans in a casual setting with varying degrees of New England authenticity.  As a bonus, Fraq’s and Smack are within walking distance of each other so you can do a lobster roll crawl from one to the next until you’re filled to the gills.

B.O.B.’s Lobster dish up a small menu of seafood delights amongst a variety of other food vendors at Street Feast #DalstonYard. The ambiance of this eatery is fun and festive. B.O.B’s pop up space is framed on two sides with the façade of a rustic, red-shingled lobster shack adorned with life rings and fish nets. You place your order from a take away window next to a pile of lobster traps and can consume your entrée at a wooden picnic table while watching the passersby.  For a moment you might swear you can even hear the cry of a distant seagull. B.O.B’s offer one simple lobster roll option which contains nice, large chunks of fresh lobster meat and comes dressed with homemade mayo, celery salt, paprika and lemon (ask them to go easy on the lemon). What I love most about B.O.B’s though is their bun. They spent two months perfecting the recipe and even imported their grilling trays from Maine. The result is a soft brioche roll, griddled to golden perfection in clarified butter. It is a delicious and worthy cradle for the lobster meat. Lemon-scented hand wipes – a New England lobster shack staple – are a useful accompaniment to each roll.

Fraqs is a teeny eatery with a relaxed, coastal vibe and enough rustic touches to give it a New England shack ambiance without feeling cliché. The menu is also paired back, with three simple lobster roll options – butter, garlic mayo and spicy mayo. All rolls come dressed with lettuce and celery or spring onions.  Fraq’s buns won’t blow your mind like B.O.B.’s but they are flavourful and soft without falling apart in your hands. Fraq’s butter lobster roll option is my favourite as it adheres quite closely to New England standards.  Most importantly, the quality of Fraq’s lobster is outstanding, with a fresh, briny taste and delicate texture. This quality comes from how Fraq’s owner sources his North Atlantic lobster – fresh from Billingsgate Market.  While Fraq’s regular size lobster roll is a bit on the small side and they should scale up the ratio of lobster meat to lettuce, overall this London joint delivers a New England lobster roll nirvana I’ve rarely experienced since leaving the coast of Maine.

Smack Lobster Roll Deli is the largest lobster roll joint of the three and offers the least authentic ambiance but the quality of their rolls is excellent. Smack is the sister restaurant of Burger & Lobster and the owners of these establishments have a business model which allows them to fly in their own personal shipments of fresh North Atlantic lobster several times a week.  They even have their own tanks to store the lobster until serving time. The result is consistently fresh, high quality lobster meat. Smack stuff this meat into properly griddled, buttery brioche buns for a savory flavor explosion. Stepping into Smack Lobster Roll Deli is more like stepping into a cocktail lounge than a rustic lobster shack.  Its dim lighting and slick decor don’t immediately put you in the mood to roll up your sleeves and tuck into an entrée often described as ‘seafood in the rough’ but the space is great for a first date or to refuel after a Bond Street shopping blitz. The menu offers a range of interesting, innovative lobster rolls that, while not authentic to New England, are executed well. They also offer a ‘Classic’ lobster roll – simply dressed with mayo and spring onions. I recommend choosing this option and letting the lobster meat speak for itself.  It’s worthy.