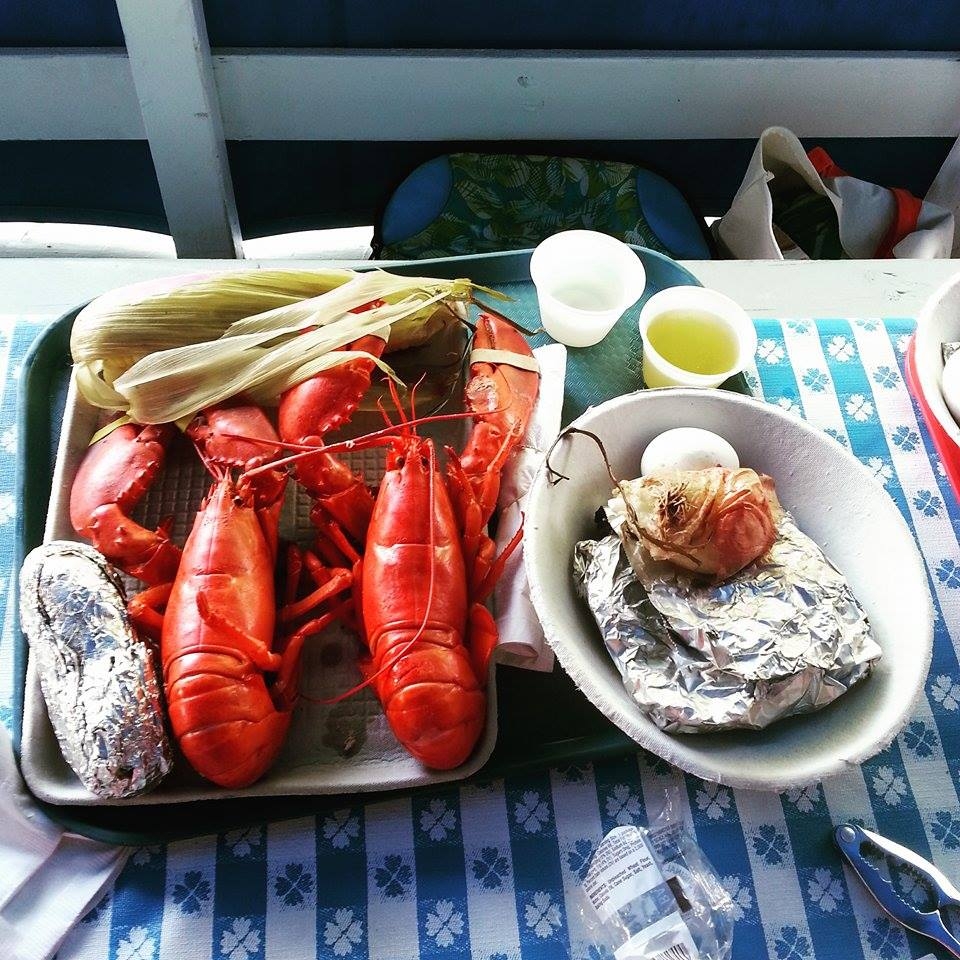 A traditional New England clambake can take over eight hours of preparation and cooking time before it is ready to consume. To start, you need to dig a two foot deep pit at the top of a sandy beach. To add an extra layer of authenticity, you should gather the seaweed and dig the clams for the clambake from that very same beach. After the pit is dug, you must line it with stones and start a hardwood fire to heat the rocks. The fire must be kept roaring hot for at least two hours before it is allowed to burn down and the wood turns to embers. This process can often take an additional two hours and must be followed through to ensure the rocks are heated to a sizzling temperature of 400 degrees. When the rocks are hot enough to split a drop of water on contact, the pit is ready for baking. Then you must layer it with fresh, wet seaweed, pile on lobsters, clams, fish, corn and potatoes and cover the ingredients with more wet seaweed, hot rocks and sand, or cover with a tarpaulin to seal in the heat. The lobster and shellfish must then steam in the pit for about two hours. Some people add an egg to the pit as a timer – when the egg is boiled, the clambake is complete and, after eight hours of digging, assembling, and waiting, the feast is ready for consumption.

Now consider that the average American spends just 33 minutes of time on food preparation per day. Also that you can throw lobsters, clams, corn and potatoes into a big pot of boiling water and they’ll be ready to eat in about 20 minutes. Is it absolute madness that summer tourists and native Mainers still seek out authentic New England clambakes? I think not. The longstanding history of the clambake and its connection to the earth makes it a perfect antidote to today’s increasingly fast-paced, urban life.

Before writing this article, I was under the understanding that the traditional clambake method was passed on to the Pilgrims when they observed Native Americans creating these ocean-side feasts. After further research, I’ve discovered that clam-baking was likely adapted as a cultural practice by New Englanders in the late 1700s out of a desire to establish a unique ‘American’ identity and traditions which were not linked to our European past.

Regardless of its origins, by the end of the nineteenth century, the clambake had become an authentic symbol of American tradition, alongside Thanksgiving, the Fourth of July and apple pie. Clambakes were a decent and trendy way of spending leisure time during the Gilded Age, a common feature of political gatherings and even appeared in art and literature as a ‘symbol of sanctuary from a world gone awry.’

Clambakes continue to be a popular past-time today. The fact that we live in such a fast-paced, industrialized world only adds to their allure. Traditional cooking rituals, like Thanksgiving and clambakes keep us connected to our roots, to each other, to the earth and to the seasons. The crew at Cabbage Island Clambakes in Boothbay Harbor confirm that consumer interest in their clambakes has continually increased through the years, with both out-of-state tourists and native Mainers eager to take part in the ritual. Customers who have experienced a Cabbage Island Clambake rave on TripAdvisor, an online review site, not only about the bounty of food served but also about the rustic atmosphere, the authenticity of the cooking process and the long-lasting memories from the experience (one customer has attended a Cabbage Island Clambake every summer for 51 years)!

Today very few clambake companies adhere fully to the original cooking method. It simply takes too much time to cook food in the ground. But companies like Cabbage Island Clambakes capture the essence of the ritual by steaming lobsters, clams, corn and potatoes in layers of seaweed and kelp above ground, in close proximity to the ocean. And locals line up with tourists, happy to spend an afternoon of their time in order to experience a cultural practice so connected to the earth, the history of our coastline and our American identity. It is the the ultimate ocean-to-table feast, a metaphor for the bounty of New England and a humble symbol of our heritage.