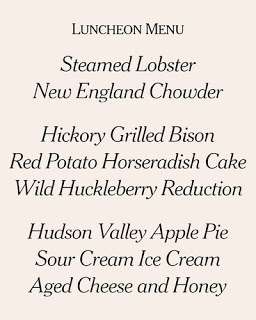 There are few foods more fit for a President than lobster.  America’s favorite crustacean has featured on many presidential menus, including the 2013 Presidential Inauguration Lunch.  When President Obama was reelected, his Inaugural lunch was a farm-to-table menu of sustainably produced and artisanal foods, including Maine lobster.

The presidential luncheon lobster dish served was steamed Maine lobster tail topped with a New England clam chowder sauce, placed atop vegetables.  The recipe for this dish is below.

1.  Combine all ingredients (except lobster) in an 8 quart pot and bring to a boil.

2.  Place lobster tails in a another 8 quart pot and carefully pour boiling liquid over lobster tails and allow to poach for approximately 6 minutes.

4. Cut each lobster meat into 6 large pieces, place in oven safe dish and add 2 tablespoons of water to dish and cover with lid or foil. Refrigerate until ready to serve.

5.  Reheat lobster at time of service by placing it in a 170º F oven for approximately 15 minutes.

3. Carefully place clams in bottom of pot.  Pour shallot liquid over clams quickly and cover with lid.  The clams will begin to open after a few minutes.

4.  Once clams are opened, remove the pot from the heat and place clams in a bowl to cool (keep shallot liquid).

5.  Remove clams from shells and rough chop (these will be added to sauce at the last minute).

6.  Strain the shallot  liquid and place into a clean sauce pot on medium heat to reduce by half (roughly 1 quart).

7. In a separate sauce pot, sauté the diced vegetable in the canola oil with pinch of salt and pepper for 3-4 minutes on medium heat.

8. Add the clam liquid and heavy cream to the vegetables and bring to a boil, reduce heat to simmer and allow sauce to reduce until your desired consistency and the vegetables are tender. The sauce should coat the back of a wooden spoon.

9.  Add chopped clams and chopped tarragon to the sauce.

2.  Sauté shallot in oil until tender.

3. Add the baby spinach and season with salt and pepper cooking only until spinach leaves are wilted.  Remove from pan and hold warm.

3. Carefully drop a small handful of sweet potato strings in the fryer and allow to crisp and turn golden brown.  Remove with a strainer and place on clean paper towels to absorb excess oil.