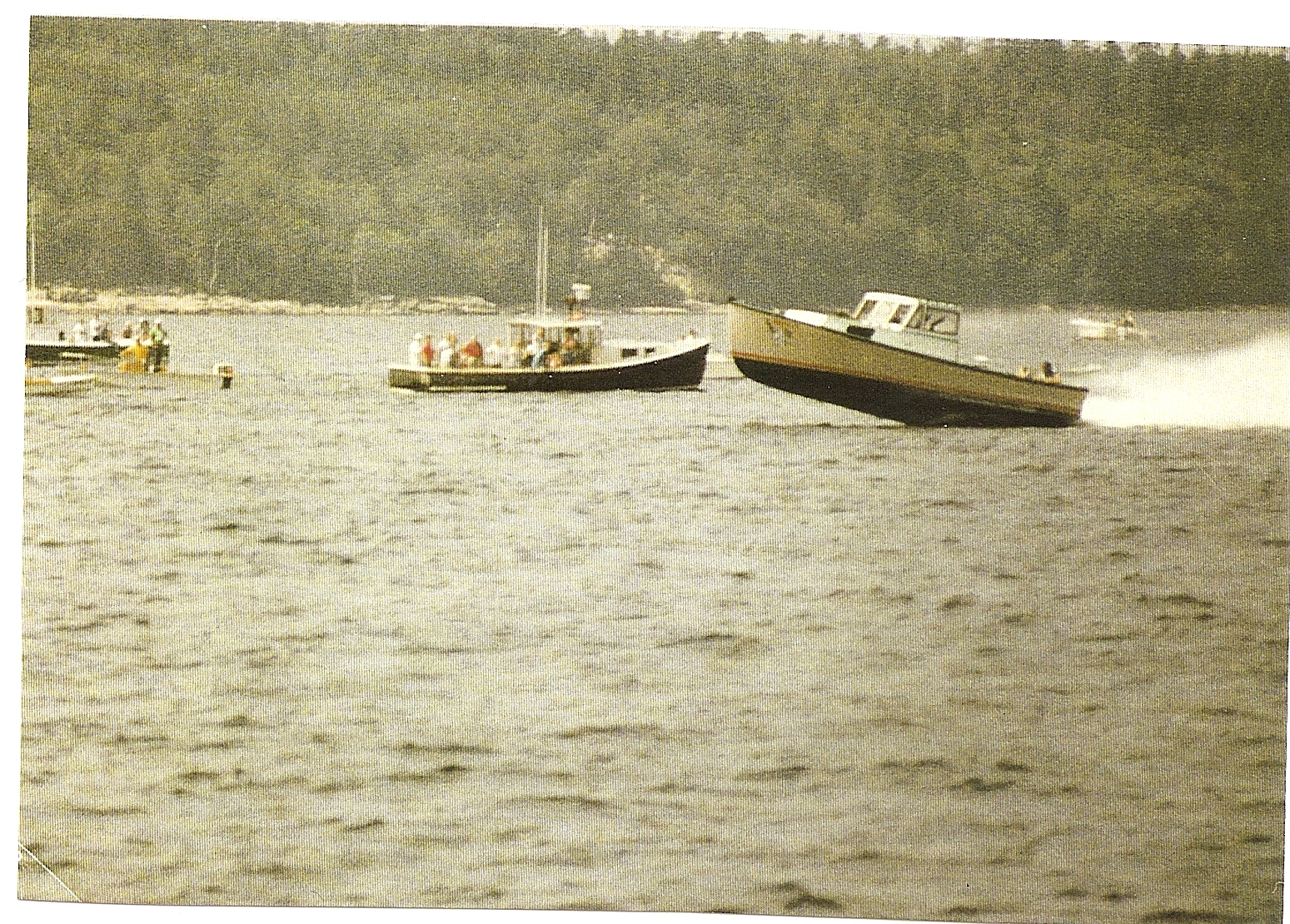 The Camel at full steam. Part of the history of Maine lobster boat racing.

The history of Maine lobster boat racing can be traced back to Jonesport Beals in the early 1900s.  Between these two fishing villages lies a sheltered body of water called Moosabec Reach. When moter-power replaced sails in the 1900s, the Reach became an ideal testing ground for boat builders to trial their latest designs. Each time a builder won the coveted prize of fastest lobster boat, it was a wonderful advertisement for his business. Each time he lost, it motivated him to improve his design. Win or loose, the races were a great way for fishermen and boat builders to blow off some steam.

Today, many spectators follow the Maine lobster racing ‘circuit’ which stretches up and down the entire coast, running from late June through the end of August. While prizes are given for the fastest boats in a number of categories, most fishermen will agree that Maine lobster boat racing is not about the prizes; it’s about the bragging rights.

Bragging rights and pride have been more than enough motivation to fuel notorious rivalries and extreme racing behavior throughout the history of the sport. In earlier years, it was not uncommon for a fisherman to smash out his cabin windows and throw fishing supplies overboard mid race to increase his speed. The shame of losing a lobster boat race has compelled some fishermen to sell their boats on the spot. A friend of our family once purchased a lobster boat which had just lost the Jonesport-Beals lobster boat race. The boat had no cabin windows or floor boards because the owner had smashed them out and thrown them out during the race.
During the 1980’s there was a particularly heated rivalry between several Maine boat builders. One of these boat builders, Glenn Holland, built and began racing a boat called the Red Baron. His vessel reached top speeds of over sixty miles an hour and gained such a reputation that Maine toy makers continue selling wooden models of it today. Another boat-building family, the Young Brothers, challenged Glenn Holland with their own super-powers lobster boat. They named their boat the Sopwith Camel, after the famed World War I British bi-plane – which shot down Manfred von Richthofen and his ‘Red Baron’ German aircraft. The Camel could also achieve speeds of sixty-plus at full throttle and had a special seatbelt affixed to the bulkhead to keep the driver secure during a heated race. While both the Red Baron and the Camel were working lobster boats, they went through a lot of tinkering at race time. This tinkering could range from changing out propellers and rudders to pumping nitrous oxide into the fuel to increase engine horsepower or reducing weight by removing the entire engine cooling system and simply running raw salt water through the engine.

Though the Red Baron and the Camel are now retired, the racing circuit is as lively and competitive as ever. In Downeast Maine, the Jonesport-Beals (Moosabec), Stonington and Winter Harbor races tend to draw the biggest crowds, with a festive, sometimes rowdy, atmosphere and the occasional mishap. One year in Searsport, a seaplane raced against the lobster boats. Another year, a boat flipped over mid-race due to the chop. A steering malfunction caused a boat to drive full throttle into the Jonesport-Beals bridge abutment one July, flinging the crew overboard in the process.

A more common sight at the Maine lobster boat races is a crowd of fishermen and race fans partying it up in the harbor. While some lobster fishermen bring their boats to the races to rev their engines, others simply come to ‘raft up’ (tie their boats together) and host a group of spectators. Grills, picnic tables and coolers of Budweiser are brought aboard and it can turn into one heck of a party.