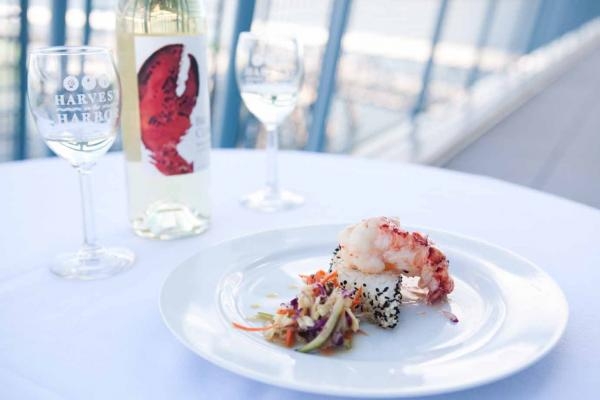 Harvest on the Harbor is one of Maine’s most popular and premium Food and Wine Festivals.  It takes place on the Portland waterfront over five days and features top Maine chefs, food from Maine’s eight regions paired with local beers and wines, a lobster cooking competition, and a moonlit gala. This year’s Harvest on the Harbor kicks off on October 21st and the schedule is below.

The 2015 Harvest on the Harbor Schedule

WEDNESDAY, OCTOBER 21 – MOONLIGHT GALA:  This year’s Harvest on the Harbor kicks off with an evening gala featuring five courses of cuisine prepared by some of Maine’s top chefs, all paired with top-tier wines and followed by dancing to big band music from Sly Chi.  The chefs, including Emil Rivera of  Sur Lie in Portland, Kerry Altiero of Café Miranda in Rockland and Steve Sicinski of Sea Glass at Inn by the Sea in Cape Elizabeth will present their dishes on stage while they are passed to guests while Sommelier Erica Archer of Wine Wise will present the wines from Marchesi di Barolo which will be served with each dish.   The Moonlit Gala takes place at The Landing at Pine Point in Scarborough from 7 – 10 PM. It costs $90 and includes complimentary transportation to the venue from downtown Portland to the first 50 ticket purchasers with reservations.

FRIDAY, OCTOBER 23 – MAINE LOBSTER CHEF OF THE YEAR COMPETITION: The Maine Lobster Chef of the Year Competition is the most popular event of Harvest on the Harbor. Attendees enjoy the stunning views from Ocean Gateway while top chefs perform live cooking demonstrations of innovative lobster dishes.  Attendees can then sample the dishes which are expertly paired with wines (this year the pairings are by Julie Handel of Constellation Brands). The 2015 competing chefs include Stephen Richards of Mine Oyster (the reigning Maine Lobster Chef of the Year), Matt Ginn of EVO, Josh Berry of Union, Isaac Aldrich of Pilot House at Sebasco Harbor Resort and Nicholas Krunkkala of The Thistle Inn (who was this year’s winner of the Boothbay Claw Down lobster cooking competition). Unfortunately the Maine Lobster Chef of the Year Competition is already sold out but I’ve been able to get copies of the lobster dishes which will make up years competition – which include poached lobster, smoked lobster, lobster ravioli and lobster and turkish pasta.  You can have a peak at all the 2015 Maine Lobster Chef of the Year Recipes here and I will provide an update of the winning chef / recipe post the event.

FRIDAY, OCTOBER 23 – TOP OF THE CROP: For those who didn’t bag tickets to The Maine Lobster Chef of the Year event, there is another fantastic foodie event on Friday worth considering – the a new ‘farm-to-table’ affair called Top of the Crop. The event will pair top chefs of the region with local farmers to bring the farm-to- table movement to life.  In addition to chefs such as Cara Stadler of Bao Bao in Portland and Colin Kelly of Gather in Yarmouth, Stephen Richards will be coming fresh from the Maine Lobster Chef of the Year (possibly having reclaimed his crown for a second year running).  Top of the Crop takes place at  The Portland Company (58 Fore Street) from 6 – 8:30PM and tickets cost $65.

On Friday night there is also a Vines to Wines wine soiree and a Custom Cocktails mixology party, both held at the Custom House from 5:30 – 7PM.

SATURDAY, OCTOBER 24 – THE MAINE MARKETPLACE: The Maine Marketplace event on Saturday allows attendees to explore the unique flavors of each of Maine’s eight regions through samples of food, beer, wine and spirits along with regional stories and live music. And if you’ve ever wanted to see a 400 pound chocolate lobster, this is  your chance, as Haven’s Candies giant chocolate lobster will be on display at The Portland Company during the event, which runs from 12 – 2:30PM and again from 4-6:30PM (tickets cost $50).

Also on Saturday the 24th is a Harvest Hop beer and whisky crawl at East Bayside from 7-9PM.

For the full Harvest on the Harbor schedule, click here.

If you make it to this year’s Harvest on the Harbor, I’d love to hear your perspective on the festivities.  If you’d like to read about other Maine festivals and events, click here.