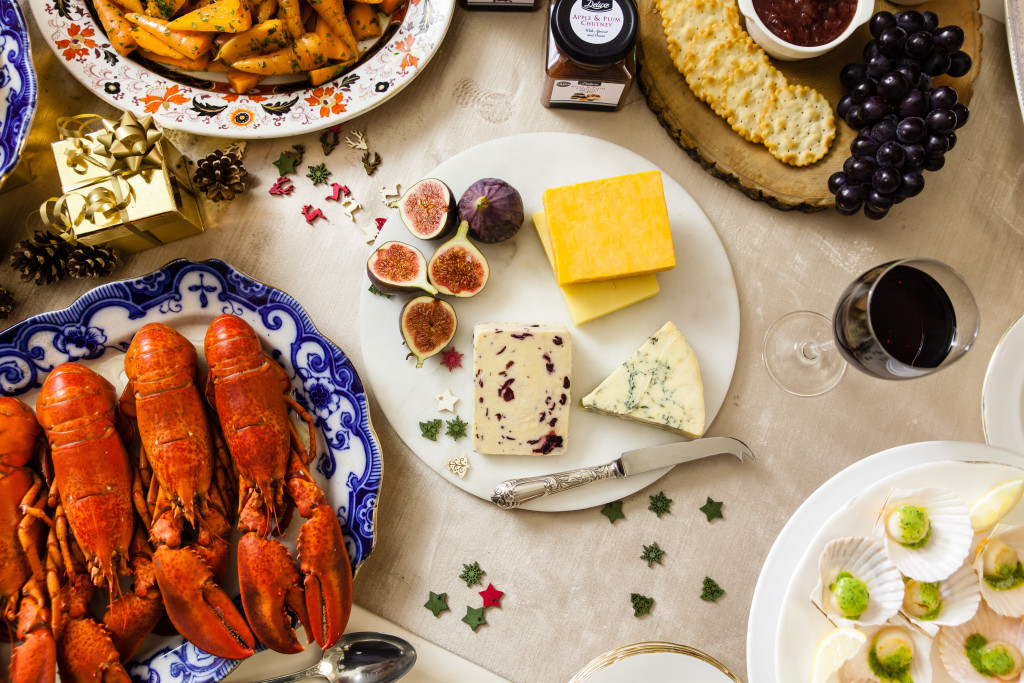 The festive season is upon us and, for many Europeans, feasting on seafood is a central part of the celebrations. As a Maine native of French extraction, married to a man of Italian descent and now living in the United Kingdom, I find myself with a particular and somewhat multi-cultural view of the role lobster plays in European holiday traditions. I love the distinctions that make the holidays in Europe unique, from my daughter referring to Santa as Father Christmas to the foods that make up the holiday meals. As Advent approaches, it’s a good time to look at the cultural significance lobster plays during December on this side of the pond.
In Southern Italy, Christmas Eve is celebrated with a seafood extravaganza. The origins of this feast, often called La Vigilia (The Vigil), stem from the Roman Catholic ritual of abstaining from meat on holy days. Prior to Midnight Mass, family and friends gather at home and enjoy an array of seafood dishes ranging from salt cod and sea bass to mussels, octopus and, sometimes, lobster.   The number of fish, spread out family-style, varies from seven to as many at 10 or even 13 and is said to have a religious significance. Some families serve seven fish to represent the seven sacraments of the Catholic Church. Some serve 10 for the stations of the cross. Some serve 13 for the twelve Apostles plus Jesus.
Over the years, this feast has been popularised by Italian-Americans and is often referred to as ‘The Feast of the Seven Fishes’ (Festa dei sette pesci). Elaborate versions of the meal can include a banquet where each fish dish is cooked in a different manner – for example, fried, baked or broiled – or uses a different main ingredient – from seafood salad to pasta served with a seafood sauce. Two lobster dishes I’ve seen referenced when reading about the Italian-American interpretation of La Vigilia are Lobster Oreganata – lobster baked with bread crumbs and oregano – and Lobster Fra Diavolo – spicy lobster with pasta in tomato sauce.
In Italy, however, it is much more common to enjoy lobster on New Year’s Eve. As explained by my Southern Italian friend, La Vigilia is celebrated at home with “local seafood and homemade recipes.” New Year’s Eve is about “luxurious food and wine, spending lots of money and perhaps going to fancy restaurants.” On this day, most restaurants feature lobster as a main menu item. Those Italians who can afford to, indulge. Of the $50 million dollars of U.S. lobster Italy imported in 2013, more than one-fifth of that lobster was delivered in the month of December, destined for Italians wanting to celebrate La Dolce Vita (the good life).
“Qu’est-ce que vous manges cette année” (what will you eat this year?) is a topic much discussed by the French in the weeks before Réveillon, France’s culinary highpoint of the year. Celebrated on Christmas Eve, Réveillon dates from the mid-1800s, when a fine meal was prepared for the return from Midnight Mass after a day-long fast. Derived from the French word for ‘awakening’, the Réveillon feastrevived diners and also symbolized an awakening to the meaning of Christ’s birth.
Through the years, Réveillon meals have become more opulent and luxurious. While there is no set menu, oysters, escargots, foie gras, scallops and lobster are commonly featured in restaurants and in the homes of those hosting the feast. In 2013, France imported $35 million of U.S. lobster. More than a third of that lobster was delivered in December, prior to the holiday celebrations. The 2014 Christmas Eve menu of Le Meurice, one of the premier, three-star restaurants in Paris, includes oysters, scallops, sea bass, game pie and lobster with Jerusalem artichokes and black truffle, all for the eye-watering price of €650 (yes, that’s roughly $800).
Réveillon celebrations may also take place on New Year’s Eve both in France and in other locations such as New Orleans or Quebec.
The United Kingdom is primarily a Protestant country. The main Christmas meal is celebrated on December 25th and traditionally includes items such as roast turkey or goose, Brussels sprouts, bread sauce, pigs in a blanket (sausages wrapped in bacon) and lashings of gravy. But over the last decade an increasing number of British consumers have been selecting seafood as the focal point of their festive feasts. British grocery stores have seen record-breaking seasonal demand for luxury fish and shellfish in December. In 2011, industry experts estimated the speciality fish market at Christmas to be worth as much as £20 million (roughly $31 million) and it was growing by 15 per cent annually.
United Kingdom supermarkets are capitalizing on this trend. Seven major British grocery stores, which represent almost 90% of the British grocery market, are featuring frozen Canadian lobster in their range of Christmas products. Often this lobster is promoted at cut-rate prices.
The advertising agency I work for, TBWA, just released a Christmas TV commercial for the discount supermarket Lidl. The ad shows people feasting on a deluxe range of Lidl products, including Canadian lobster. The 2014 Christmas advertisement for the discount supermarket Iceland features a celebrity holding up a package of frozen lobster, exclaiming “whole Canadian lobster…for a fiver!”

The British retailers behind these ads are using lobster to symbolize the quality and luxuriousness of their holiday product range but at a budget price, hoping to lure in more middle-class shoppers. The discount cost of the crustaceans is a headline-grabbing public relations exercise in itself. The low price makes a good newspaper headline: “Now we can ALL eat lobster: Budget supermarket Morrisons unveils £10 Christmas crustacean” or “A real catch! Iceland unveil plans for £5 Christmas lobster.”
As Europeans sit down to this year’s holiday feasts, some will be partaking in age-old traditions while others will be participating in modern trends. Regardless of the reason, it is wonderful to know the exceptional role lobster plays in celebrations during such a special time of year.
« What’s in a Maine lobster boat’s name? Every one tells a story.
Perfect wine pairings for your lobster dinner »