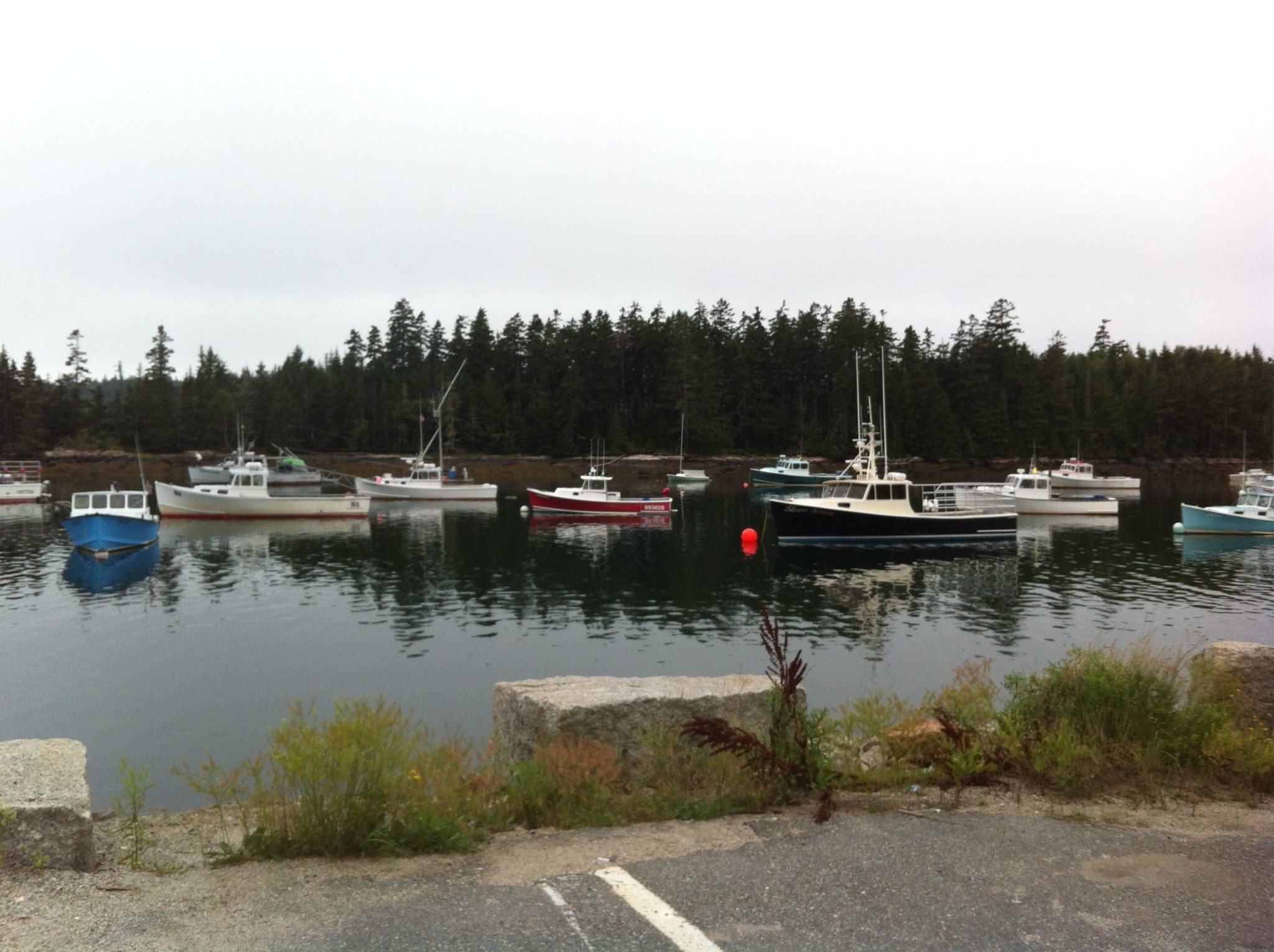 Winter Harbor is a snug little fishing village near the tip of Schoodic Peninsula. It’s a bit of a drive off Route 1 but well worth the journey. Along the way you’ll pass blueberry barrens, mossy heaths and sheltered coves.

Of the two roads leading down to the lobster fishing village, I recommend taking Route 195 which cuts through Prospect Harbor, another lovely fishing village, and past the iconic “Big Jim the Fisherman” sign stretching up over the village rooftops and into the sky.

The sign was originally erected as an advertisement for the Stinson Seafood plant and the yellow-slickered fisherman held a giant can of Beach Cliff sardines in his hands. Sadly, in 2010 Stinson’s, the last herring cannery in the U.S, was closed. The plant has since been reopened as a lobster processing facility and “Big Jim” has been given a creative update as well. He now clutches onto a lobster trap vs. a sardine can. The demise and transformation of the factory has been documented in a raw and touching film titled “Downeast.”

Upon reaching Winter Harbor, you’ll first see the small but pretty Main Street.  The street contains just a handful of shops.  One of these is the Winter Harbor 5 and 10, which boasts that it carries everything from asprin to zippers (A to Z).  In addition to practical items, the 5 and 10 also carries locally made items.

Across the street from the 5 and 10 is J.M. Gerrish Provisions.  This simple market and cafe serves breakfast and lunch, gourmet coffee, home baked goods and ice cream. It also serves dinner Thursday through Saturday.  The Fisherman’s Inn, right off Main Street, is another good place to stop for a bite. It promises “Real Food, Done Well” and features a variety of lobster dishes, including baked, stuffed lobster, lobster pie and steamed lobster, all thoughtfully paired with specific wines on the menu.

Beyond these two stops, the town contains several craft stores and artists studios.  Schoodic Arts for All, housed in a historic building on Main Street, hosts art exhibits, concerts and performances throughout the summer months.  A sign along the sidewalk of Main Street provides visitors with details behind some of its more historic buildings, including the beautiful stone library.

The actual harbor, which is at the end of Main Street, is a snug little port with a full, active fleet of lobster boats.  It was given the name Winter Harbor because the harbor, doesn’t freeze over in the winter.

This harbor, and the town itself, really comes to life each August during the Winter Harbor Lobster Festival.  The festival includes lobster boat races, a craft fair and a lobster dinner.  Growing up, I used to attend the Winter Harbor Lobster Festival each year by boat, with my father as he participated in the lobster boat races.  This year I visited the festival by land as I was there to promote my new book.  Over the course of the day, I witnessed 900 pounds of lobster being served to lobster lovers.  For the bargain price of $15, diners were served a steamed lobster with drawn butter, corn on the cob and fresh blueberries with cream.

Beyond the beautiful harbor and quaint ‘downtown,’ Winter Harbor is also home to Grindstone Neck, a summer colony developed in the late 1800s by wealthy rusticators seeking a quiet alternative to Bar Harbor.  Today, the peninsula includes a variety of ‘cottages,’ a yacht club, a nine hole golf course, tennis courts, footpaths and beautiful views of island-studded Frenchman’s Bay.   One of the most famous former Grindstoners, Fitz Eugene Dixon, Jr. (listed several times in Forbes as one of the richest Americans), contributed greatly to Winter Harbor.  His various charitable acts have seen the town gain a gymnasium, sidewalks, benches, and streetlights.  My father did some boat work for Dixon back in the 1980s and has told me wonderful stories of Dixon’s love of boats and the pleasure he took in the Winter Harbor Lobster Boat Races.

Another must while in Winter Harbor is a visit to Acadia National Park’s Schoodic Peninsula, which provides nice hiking trails as well as a beautiful scenic drive for no entrance fee. In the summer months, a ferry travels between Bar Harbor and Winter Harbor and a free shuttle service operates within the park.
To return to my list of the five prettiest lobster fishing villages in Maine, click here.