Maine-ly Lobster > Lobster In Europe > Can You Get A Good Lobster Roll In London? 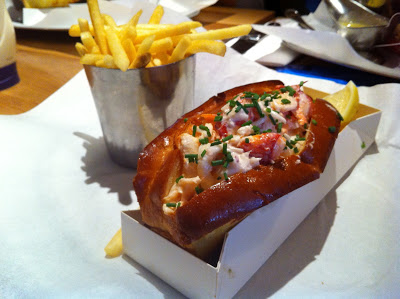 Can you get a good lobster roll in London? The answer is yes.

Last week several co-workers and I made a pilgrimage to Burger and Lobster in Mayfair, which serves lobster rolls as one of its menu items.  We came back singing it’s praises.

Since its opening last autumn,  I had been skeptical about the ability of Burger and Lobster, or any London eatery, to produce a lobster roll which would meet my exacting standards. Lobster rolls were a staple of my diet growing up.  We made our own, mixing big, juicy chunks of lobster meat with just a whisper of mayo then stuffing the mixture inside a buttery, toasted JJ Nissen split-top bun.  The roll was always stuffed-to-overflowing with lobster meat.   The creation was a homage to the sanctity of the lobster.  No other ingredients dared get in the way. This is a classic Maine lobster roll. Lobster, mayo, bread roll, butter and nothing else.  And it’s delicious.

When hearing about a London lobster roll eatery, I worried that they wouldn’t get the bun right and that they’d try to go too fancy, adding unnecessary ingredients.  I also worried that the portions would be too skimpy and, most importantly, that the lobster meat wouldn’t be fresh and delicious.

I have to admit though that Burger and Lobster really blew me away.  The lobster roll portions were generous.  The bun, while not JJ Nissan, was comprised of toasted brioche and tasted delicious.  Most importantly the lobster was extremely fresh and flavorful.  It was the freshness of the meat that really blew me away.  After questioning the waitress, I discovered that the owners of Burger and Lobster import their own lobsters twice a week and store them on site in circulating salt water tanks.  They even took us for a tour to show us the tanks (see picture below). 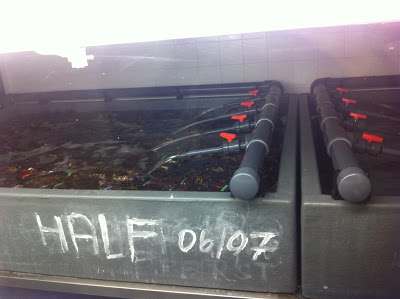 The fact that Burger and Lobster directly import their own lobsters is a key to the freshness of their meat.  Upwards of 80% of the lobster sold or served in London is imported from Canada.  Much of this is sent to Billingsgate Fish Market where it hangs out until restaurants purchase it.  When I visited Billingsgate several years ago and spoke to the fishmongers, I learned that much of the lobster was being transported using a tubing method.  I am not sure if this is still the case but the impression I’ve got, which is in sync with other professionals, is that lobster sourced from Billingsgate is not always as fresh as it should be. By importing their own lobster then ensuring quick consumption of the lobster, via their “only three items on the menu” strategy, Burger and Lobster ensure their lobster is always fresh.  I’m already looking forward to my next London lobster roll!

To read about where to get the best lobster rolls in Maine, click here.

« Traditional New England Clambake Recipe (also known as a Maine Lobster Bake, Boil or Shore Dinner)
How To Catch A Lobster In Down East Maine: Book Signings In August »