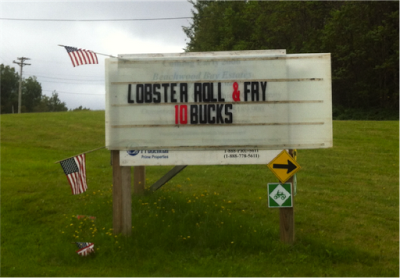 Where are the best lobster rolls in Maine? The humble Maine lobster roll has been served up at rustic lobster shacks and take outs along the coast of Maine for generations. Now, companies like Luke’s Lobster and Cousins Maine Lobster are exporting the authentic Maine lobster roll experience to the bustling metropolises of New York City, DC, LA,  Vegas Chicago and more.  Such distribution as helped shine a spotlight on Maine lobster rolls and folks travelling to Maine are increasingly eager to find the best places to consume rolls within the state.

While there are many great lobster shacks along the Maine coast, not all offer an excellent, authentic roll.  What is an authentic Maine lobster roll?  Most would agree that an bona fide Maine lobster roll includes four essential ingredients – butter, bread roll, mayo, lobster – and little else.   The lobster is usually served cold, lightly dressed in mayonnaise.  The ‘roll’, served warm, is most often a New England split-top bun which is griddled in butter until golden brown.  The ratio of lobster to bun is also critical.  The roll should be stuffed to overflowing with chunky (primarily claw and knuckle) meat.  Some eateries use claw and knuckle meat exclusively.  Others only serve meat from new shell lobsters, which is sweeter than that of hard shell lobsters.  While additional garnishings, like lettuce, celery and spices, are not out of the question, they should never overwhelm the roll.
With that in mind, below are five shacks, restaurants and road-side stands which consistently get mentioned as the best places to experience an authentic Maine lobster roll.

The Best Lobster Rolls In Maine

This bare-bones, roadside hut has been voted “fan favourite” in a heated NYC lobster roll competition (officially called The Lobster Roll Rumble). What makes The Clam Shack lobster roll so darned good?  It all comes down to the way they treat their lobsters.  The Clam Shack store their lobsters in fresh salt water tanks at the restaurant right up until they’re ready to be cooked, which keeps them plump and hydrated. They also only use new shell (or shedder) lobsters, which contain much sweeter meat than hard shell lobsters.  Finally, they hand-shred the meat for their rolls, believing that knives cause oxidation, tainting the flavour. The Clam Shack do break code by serving their lobster meat warm and for using homemade dinner rolls vs. split-top buns. Diners also get the option of butter or mayo as a dressing.

Red’s Eats is another unassuming roadside hut yet foodies are happy to wait over an hour in line in the summer months to experience Red’s lobster roll nirvana. Why is Red’s roll so good?  As with The Clam Shack, they deliver a generous portion of unadulterated Maine lobster meat. Their roll comes with an entire one-pound lobster’s worth of nearly intact meat.  This meat is served up in a grilled, split-top bun, with mayo or butter on the side. As with The Clam Shack, the lobster meat is hand torn.

If you’re looking to wolf down a lobster roll in an authentic, “working” fishing village,  head to New Harbor, Maine.  Paul Newman filmed scenes from Message in a Bottle in this salty seaside town. From the second-story deck at Shaw’s wharf-side bar, you can watch fishermen pull up in their boats and drop off their catch. Shaw’s are renowned for their lobster roll which is described by Travel and Leisure Magazine as a scarcely buttered hot dog bun which “cradles glistening chunks of perfectly shredded, bite-size meat, nicely chilled yet not overly so, with a touch of mayo and lemon that doesn’t overwhelm the lobster.”

A local landmark since the 1920s, The Lobster Shack at Two Lights offers postcard perfect views and excellent lobster rolls.  Diners can enjoy their meal oceanside, on picnic tables perched just above the crashing surf, with a view of Portland Light, the most photographed lighthouse in the world.   As for their lobster roll, it contains a generous serving of fresh lobster meat (each roll gets one soft shell lobster’s worth of meat) tucked into a buttered and toasted split-top bun on top of a bed of iceberg lettuce.  It comes with a scoopful of Ken’s Extra Heavy Mayo sitting on top, as well as a pickle. They’ll also do melted butter upon request. During the busy months of July and August, The Lobster Shack at Two Lights easily hustle out 1,500 to 1,800 rolls a day.  Expect long lines and total satisfaction.

As rustic as its surroundings, Cook’s provides such a classic Maine environment that it was once featured in a Visa commercial about lobster. Cooks lobster rolls come with meat from a 1 pound lobster, a teaspoon of mayo and a pinch of salt and pepper and are served in a grilled split-top bun with a leaf of lettuce. The AAA once voted them the best lobster roll in Maine.

Beyond these top 5 places to get a lobster roll in Maine, I wanted to give an honorable mention to The Galley Restaurant in Naples, Maine, who have developed a menu of gussied-up lobster rolls that has captured the attention of Adam Richman, host of the Travel Channel’s new show “Best Sandwich in America.”  Currently The Galley’s lemon zest lobster roll is quite popular but they also serve a ceasar roll, dressed in light ceasar dressing, garnished with parmeasan and a galley roll with sweet relish. If you’re looking for a more adventurous lobster roll while in Maine, this is the place to go.
« How To Catch A Lobster In Down East Maine: Review from the Machias Valley Observer
Maine Lobster Fishing Featured on MSNBC Today »