My father and brother have been in the Maine lobster boat building business since the 1980’s.  Each winter, once the lobster season has drawn to a close, they park their own lobster boats on the mooring and begin building a new boat in their boat shop in Cutler. The boat starts as a bare hull and over the course of several months an engine, shaft, propeller, rudder, hydraulics, electronics, fiberglass decks and a plethora of other items are added, turning the shell into a sleek, sturdy, seaworthy Maine lobster boat.

A family member was able to capture the arrival of this winter’s hull arriving at Little River Boat shop via drone and video.  The aerial photos will give you a sense of size and scale of a modern Maine lobster boat and the video demonstrates the driving skills needed to back one of these massive boats into the opening of our family’s boat shop. 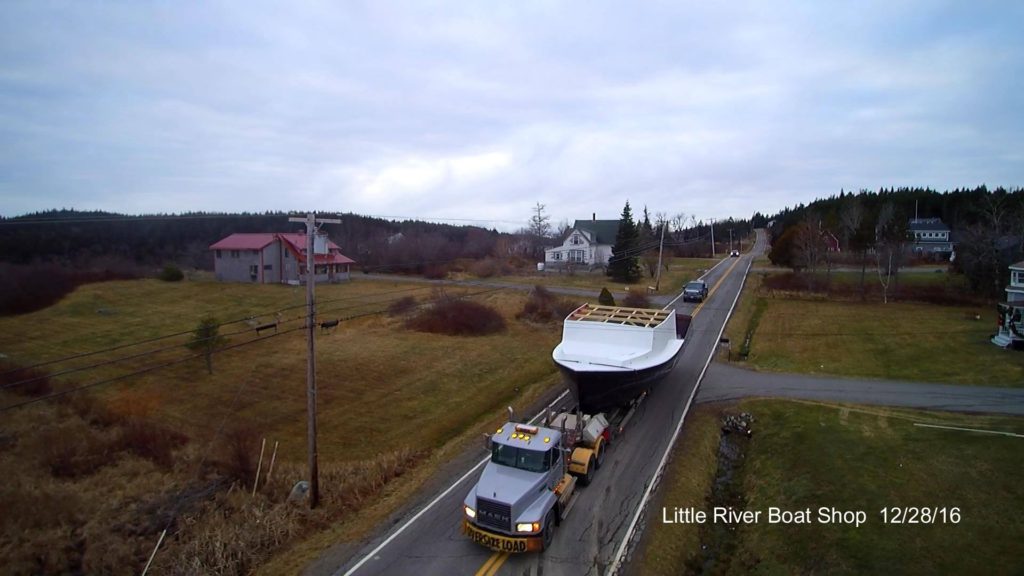 With regards to hull designs, Downeast lobster boats come in one of two designs: built-down or skeg. Built-down style boats are those where the hull curves into the keel. Skeg models are those where the hull goes flat into the keel. Which design is best is a matter of debate. I grew up in skeg country, so my family is a bit biased toward that style of boat. Built-down boats are said to be more buoyant and spacious.  Skeg boats are less expensive and lighter. They are also said to be faster, as there is less holding the hull back. Some believe a built-down boat is more seaworthy due to the buoyancy. Others think a built-down boat gives you buoyancy where you don’t want it, causing the boat to rock and roll a bit. In Down East Maine, the Beals, the Young Brothers and Ernest J. Libby all build skeg boats. Spencer Lincoln’s designs are built-down boats.

Beyond built-down and skeg variations, there is really no dominant hull style in Down East Maine. The majority of modern Maine lobstermen prefer a semi-displacement or cruising-style hull because they want more speed. While a boat’s speed is determined in part by the engine horsepower, the shaft RPMs and the size of the propeller, some hull designs cause a boat to top out at a certain speed. With a cruising-style hull, each application of the throttle is met with a proportional increase in speed, allowing many boats to achieve a cruising speed of sixteen to twenty-two knots, with top speed on some boats exceeding forty knots.  As Spencer Lincoln, a Downeast boat designer, said so well:

‘The absolutely lovely characteristic of a lobster boat is the relationship between boat speed and engine rpm. For each application of the throttle, you get a commensurate increase in speed.’

The last twenty years or so have also seen hull designs trend toward a wider stern to accommodate the larger gangs of traps being fished. To minimize the impact on the boat’s seaworthiness, modern-day boat builders have revised their designs, adding deeper keels and larger rudders to help the boat track well in a following sea. Still, every boat is a bit of a compromise. Today’s wider-sterned boats allow you to bring five or six tons of gear aboard when you’re setting off, but they don’t handle as gracefully in a following sea or rough weather.

I look forward to seeing the how this year’s boat build progresses in my family’s boat shop.