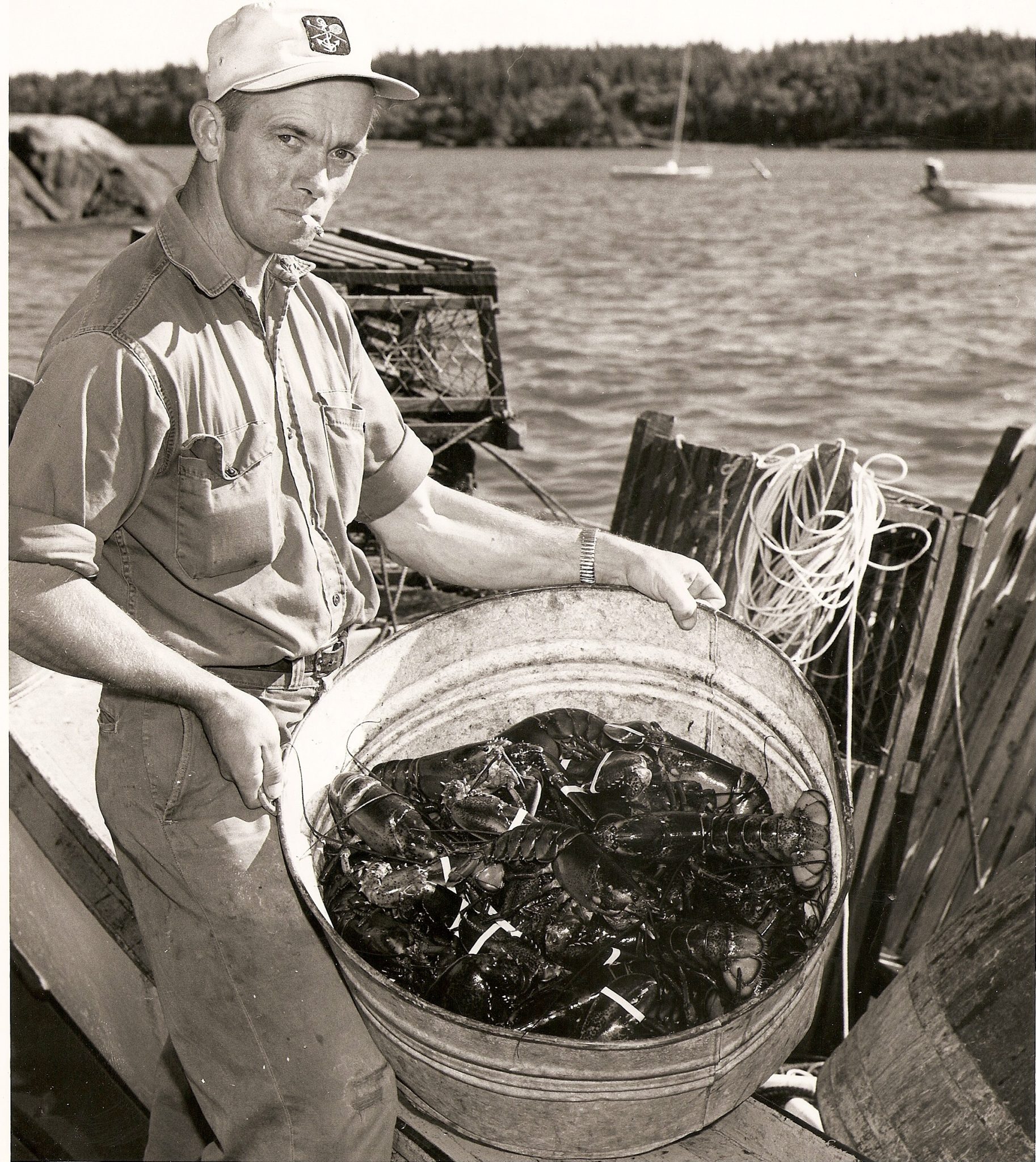 My grandfather harvesting lobsters in the mid 1900s. Photo courtesy of Delia Farris.

Lobsters have been part of our diet and culture since before America was known as America. Through the years, lobster has progressed from poor man’s food to a luxury food item served in the grand lobster palaces of New York City and at White House dinners. Here is a brief history of the role lobster has played in American Culture.

A Brief History of Lobster in American Culture

Native American tribes of Massachusetts, Maine, and Connecticut cooked clams and lobsters in sand pits as means of subsistence as far back as 2000 years ago. These tribes did not have large cooking pots, so they used the earth as their cooking vessel. Before Bar Harbor was known as Bar Harbor, the Wabanaki tribe gathered clams, and other shellfish in this part of Mount Desert Island and referred to the area as Ah-bays’auk (“clambake place”), leaving large piles of shells as evidence of the practice. According to historical lore, the traditional New England clambake method was passed on to the Pilgrims when they observed Native Americans creating these ocean-side feasts however the actual history of the New England clambake is less straightforward (click here for more detail on the history of the New England Clambake).

Lobster, Colonists and the first Thanksgiving

When colonists arrived in ‘the New World,’ lobsters were almost certainly part of their diet. English settlers reported catching lobsters in nets as early as 1605 and Captain John Smith of Virginia described the bounty of lobsters along the shores of Maine when he visited Monhegan and the midcoast region in the early 1600s.

While there are no official records, it is likely that lobster was served at the first American Thanksgiving. Though turkey dominates the table today, it’s likely that smaller birds such as goose or duck were the wildfowl of choice for the original Thanksgiving feast.  In addition to wildfowl, shellfish such as lobster, clams and mussels were plentiful and a common part of the Native American diet at the time and likely made up part of the 1621 dinner.

In the 1600s, lobsters were so abundant they would wash up on beaches and Native Americans used them as fertilizer for their crops. Considered to be ‘poor man’s food’, lobster was often fed to prisoners and indentured servants by European colonists. A group of servants once brought their master to court with the accusation that he was serving them lobster too frequently. The judge who oversaw the case ruled that these servants should not have to endure lobster dinners more than three times a week.

In the late 1800’s, Maine became linked to the rest of America by railroad tracks, allowing entrepreneurial individuals to to pack lobsters in ice and ship them live throughout The States. One story attributes the newspaper tycoon William Randolph Hearst with the first order of live lobster for a dinner party in Colorado.

The late 1800’s saw grand ‘lobster palaces’ become a key part of New York society. These elegant expensive late-night restaurants catered to the rich and famous and specialized in lobster. A typical dinner for one lobster palace patron, successful financier James Buchanan Brady (also known as “Diamond Jim”),  was two or three dozen oysters, six crabs, and a few servings of green turtle soup, followed by of two whole ducks, six or seven lobsters, a sirloin steak, two servings of terrapin and a plethora of vegetables. And he still had room for a dessert of pastries and candy!

Lobster – fit for Presidents and Dignitaries

During the last two decades a group of consumers, called the Millennials, has come of age. Their value system, shaped by years of exposure to corporate greed, the anonymity of the computerized world, and the tenuousness of stable work has led them to yearn for authenticity in the products and services they purchase. This desire for authenticity, often tied to localism and regional pride, is once again redefining the relationship Americans have with lobster.

While lobster remains a symbol of  luxury to many, Millennials find lobster aspirational in a special way.  They value lobster for it’s superior flavor but also because it is a sustainably-sourced food product with a wonderful provenance story.  Millennials are interested in the human touch behind luxury products and services and care that Maine’s lobster industry is an owner-operated enterprise, that lobsters are wild-caught, and that there are strong conservation measures in place to ensure the long-term sustainability of our lobster stocks.