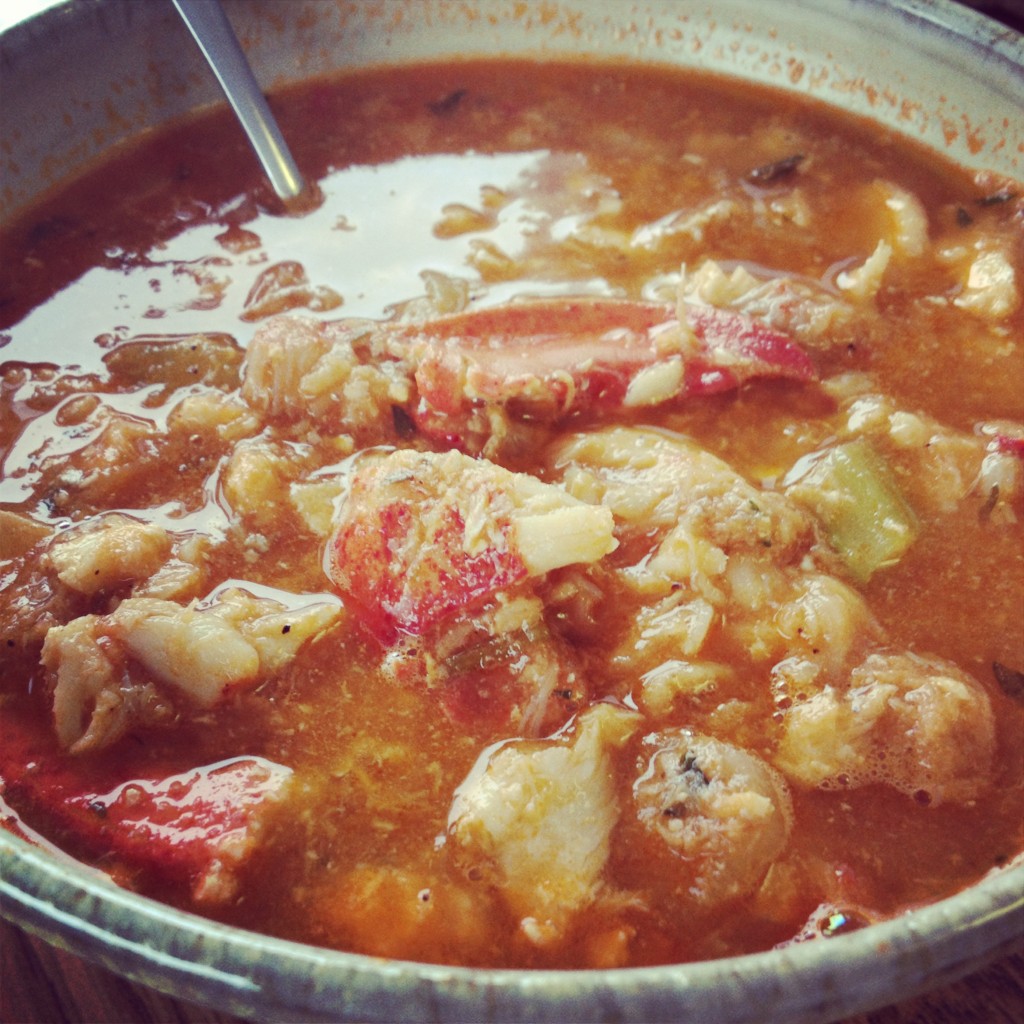 Bouillabaisse is one of my favorite French dishes.  Beyond its rich, aromatic flavor, the entrée always reminds me of the South of France, where I have been lucky enough to enjoy this delicious dish over lazy summer lunches.

Bouillabaisse originated along the Cote d’Azur as a humble fishermen’s stew made from the leftovers of the catch they weren’t able to sell. These fish scraps would be boiled in a pot of seawater over fire and seasoned with garlic, fennel and tomatoes. By the 19th century, the recipe had been adapted, by restaurants and middle-class housewives, and refined with the introduction of saffron and the substitution of fish stock for water. Today it is a popular dish not just up and down the sunny southern coast of France but around the world.

I have always thought that a Maine lobster bouillabaisse would taste amazing. I can now confirm it does. Ironically, my first attempt to make a lobster bouillabaisse happened in the dead of a Maine winter, during last year’s polar vortex to be exact. But the sub-zero temperature did not detract from the fun my husband, best friend and I had preparing and savouring this iconic fish stew.

We used a variation of the lobster bouillabaisse recipe from the Maine Lobster Marketing Collaborative website and it did not disappoint.  We had plenty of lobster meat for the stew, left over from a recent lobster dinner. We also were able to use some halibut my father and brother caught on a fishing trip to Alaska. The halibut held up well, absorbing the rich juices of the stew without crumbling to bits.  In an ideal world we would also have used delicious Downeast clams, but they were not available at the time. One other ingredient which we did not use due to lack of availability, and which some say is essential for bouillabaisse, is saffron. Regardless, the dish turned out beautifully, in part due to the lovely homemade lobster stock we used, and I look forward to making and enjoying bouillabaisse again…in balmy or bitter weather.

Cut the halibut fillets into chunks. Steam the lobsters, pick out the meat and set aside the shells. Use the shells to make the lobster stock (see above for a link to my homemade lobster stock recipe).
Wash and dice the tomatoes. Peel and mince the celery, onion and garlic. Wash and finely chop the herbs.
In a heavy weight pan over medium heat sauté the garlic in oil. Cook until the edges are browned slightly. Add the onion, celery, tomato, lobster stock and saffron (if you have it). Simmer until the onions have softened. Add the halibut and the lobster and simmer until the halibut is white and cooked through. Toss in herbs and season with salt and pepper.
Serve with crusty French bread and a bottle of lush Rose’. We served this lobster bouillabaisse with MIP rosé and it went beautifully.