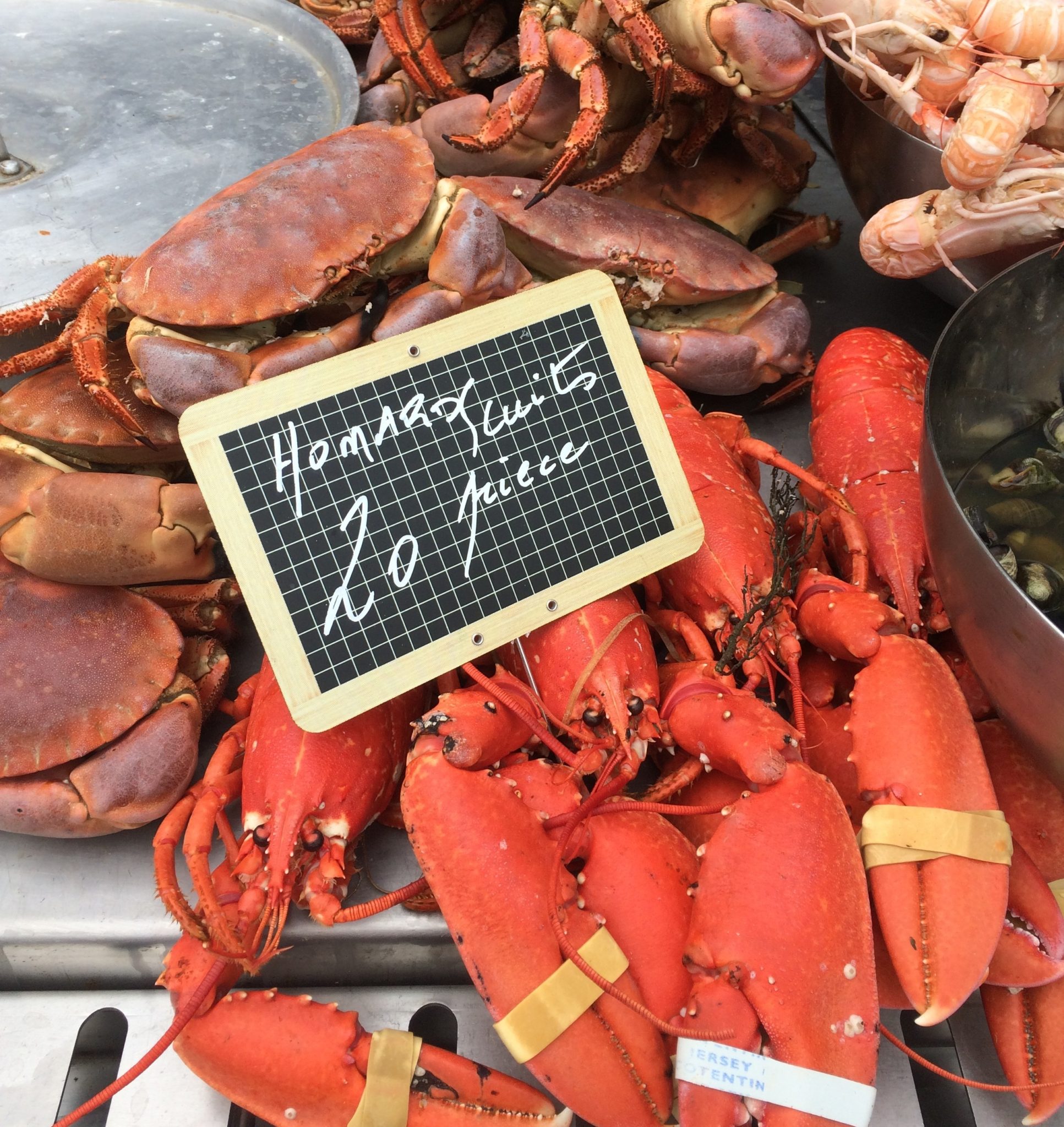 Those of you who have read a bit of my blog will know that I come from a tiny lobster fishing village in the depths of Downeast Maine and have a deep love for quaint coastal towns and authentic fishing villages.  There is something special, almost sacred, I feel in communities with such an intimate connection to a wild food source.

Those who know a bit more about me may be aware of the fact that I currently live and work in London.  While here I have cherished the opportunity to explore a number of working fishing villages along the English coast and throughout Europe. The highlight though was a trip I took this May to one of the most beautiful and historically significant working fishing villages in northern France, Honfleur.

Honfleur is special on a number of levels.  First of all, this Norman port is breathtakingly picturesque. Artists from Boudin to Monet have flocked to Honfleur to paint its ever-changing light against the backdrop of the ancient harbor.  As a result, the town has been immortalized in a plethora of Impressionist paintings just as Maine’s Acadia has been captured on countless canvasses. From its cobblestone streets and winding lanes to its pretty little harbor, Honfleur is charm overload. 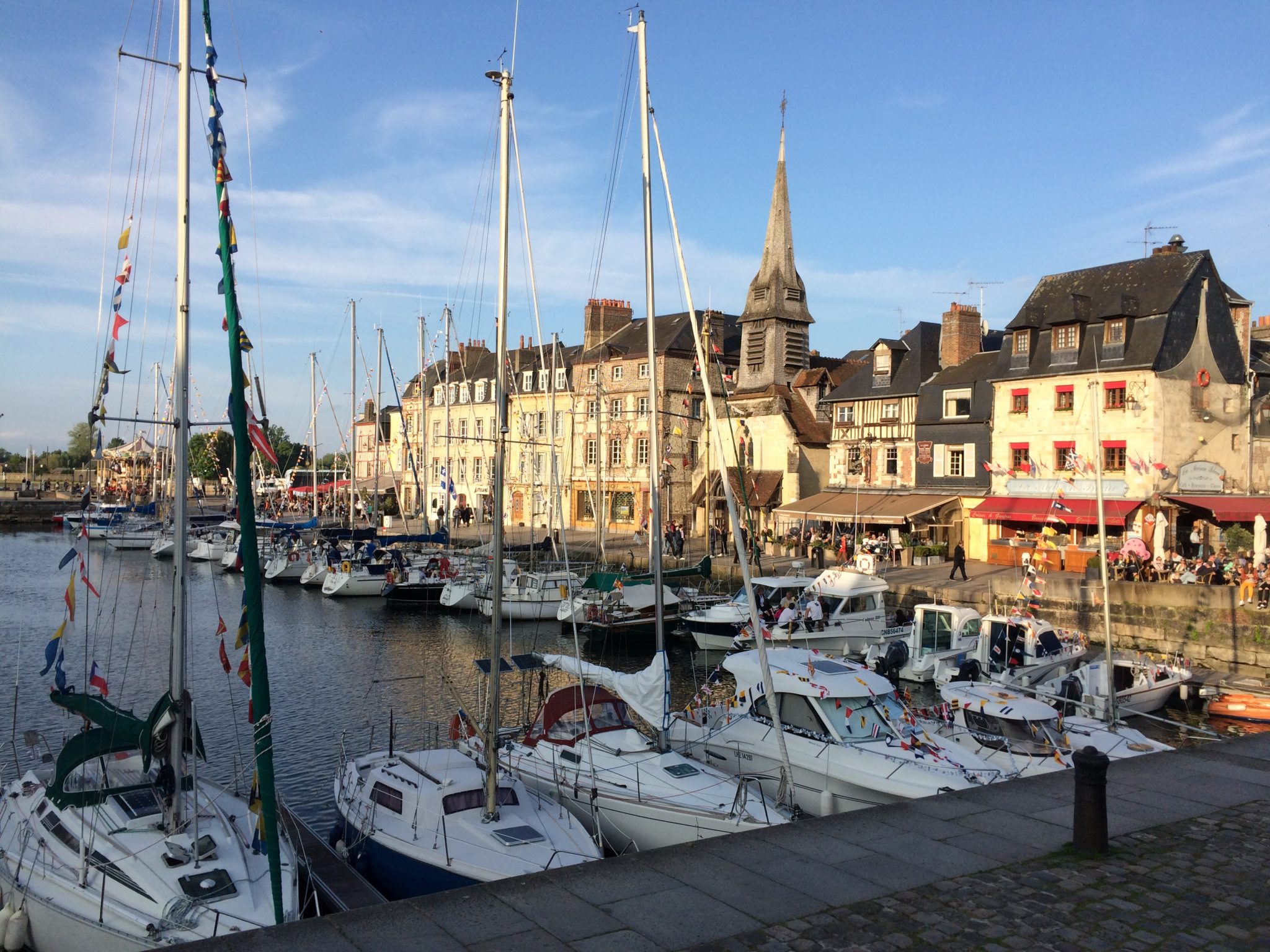 The town is also steeped in history.  Settled by the Vikings, Honfleur has been a fishing town since the middle ages and in the 17th century it became a launch point for sailors heading to the New World, including Samuel de Champlain who founded Quebec. Honfleur’s history has personal significance to me because my ancestors, the Lemieux’s, originate from the Norman city of Rouen and likely set sail for North America from Honfleur.

Beyond beauty and history, Honfleur offers its residents and visitors a bounty of fresh, delicious seafood.  Each day fishermen unload and sell their catch – everything from sole, turbot and mackerel to oysters, scallops, shrimp and lobster – directly at the docks. Historic law dictates that the selling of the catch must be done by the fishermen’s wives so the event is very much a family affair. 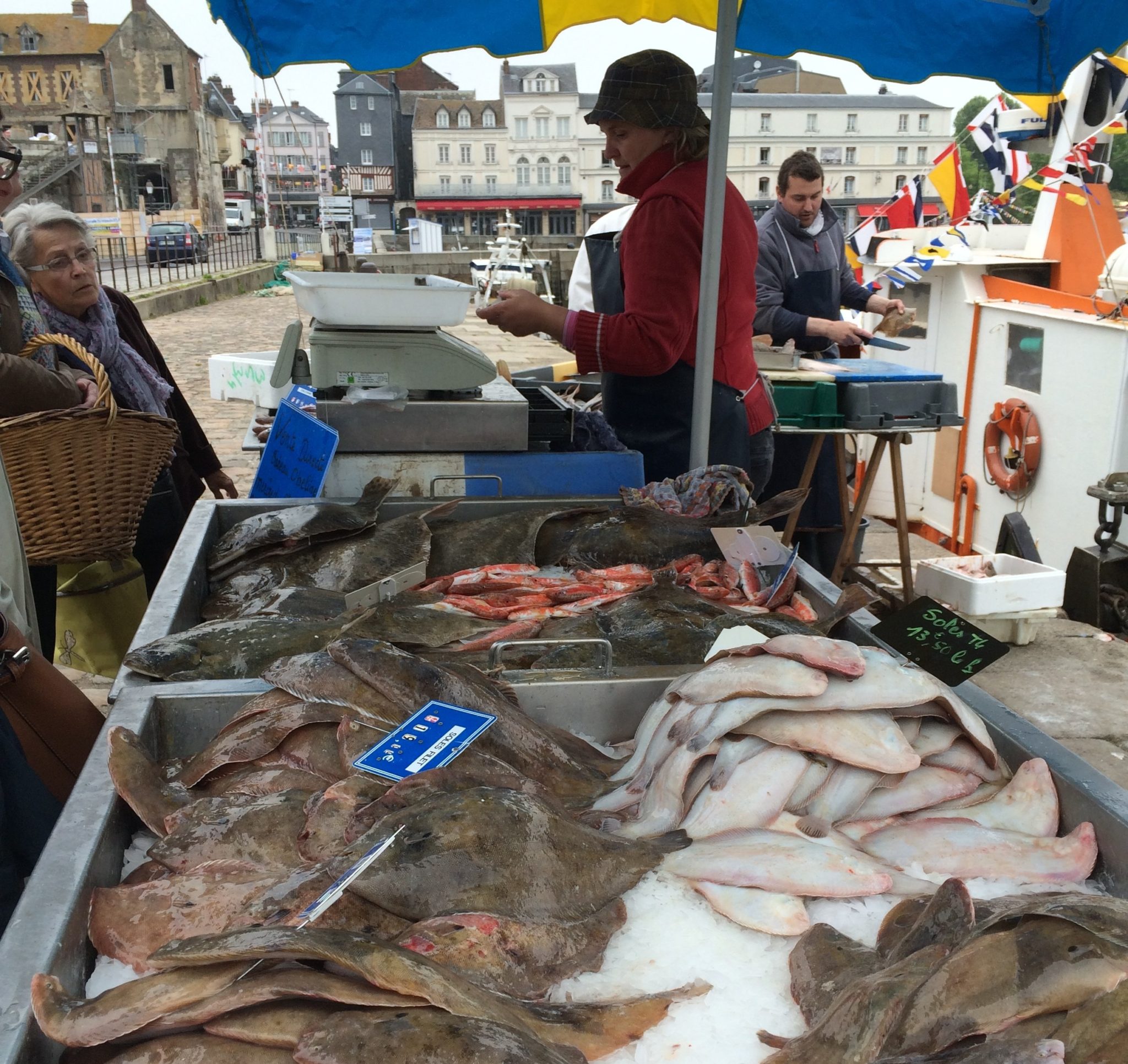 Fishermen also sell fresh seafood at the town market every Saturday.  Fish, oysters, shrimp, crab and lobster were piled high on stalls throughout the town square when we visited. Fresh lobster was selling for the not-so-bargain price of 28 Euros per kilo (that’s roughly $31 for a two pound lobster). Within two hours all the lobster had been sold. Several stalls were also making a traditional seafood stew called Marmite Dieppoise. Similar to the well-known Mediterranean fish stew Bouillabaisse, Marmite Dieppoise was originally prepared with the leftovers of the catch.

I always enjoy observing how seafood, especially lobster, is served in different cultures around the world. Tourists come to Maine to roll up their sleeves and feast on shore dinners, clam bakes and lobster rolls. Diners in northern France enjoy lobster as part of a plateau de fruits de mer – a seafood dish of raw and cooked shellfish served in a bed of ice on a tiered platter.  The platter contains crab, shrimp, oysters, winkles, whelks, crab, and a lobster which is grilled and served split in two as the main attraction at the top tier of the platter. A plateau de fruits de mer with lobster for two people in Honfleur costs around 98 Euros (over $100). 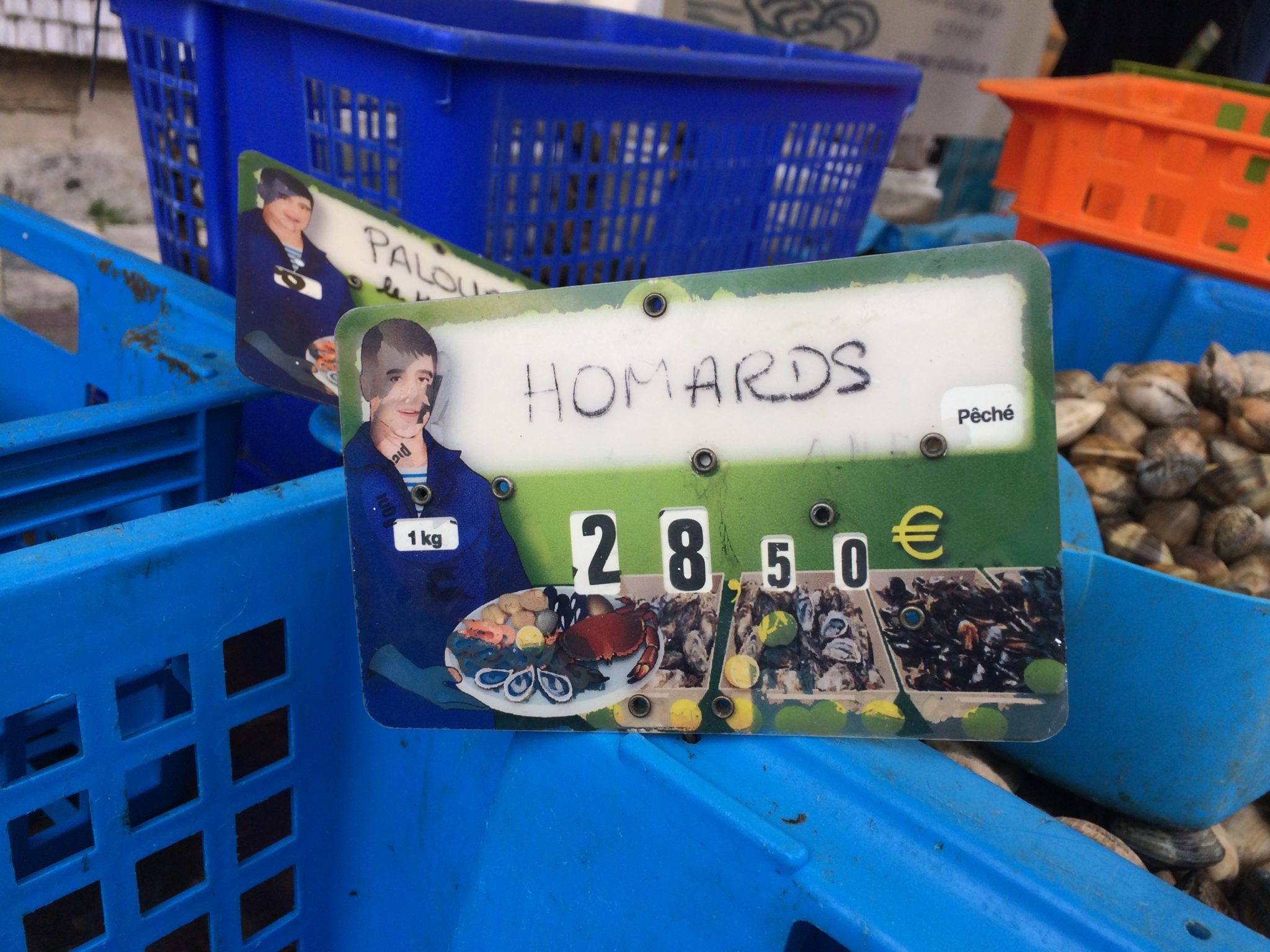 An empty basket of Honfleur Homards, aka lobsters, which sold for €28 per kilo.

Finally, any coastal town worth its weight in gold will have a charming festival. Honfleur did not disappoint.  We visited during their annual Sailors Festival which has taken place every spring since 1861. The festival happens over Pentecost weekend and includes a Blessing of the Sea on Sunday followed by a procession on Whit Monday. The procession, which is made up of sailors and their families carrying decorated model ships, winds its way in pilgrimage through the town center to the chapel of Notre-Dame de Grâce where a special Mass is celebrated.  The town of Honfleur is decorated with flags for the occasion and the boats and houses are strewn with garlands of flowers. Elements of the celebration, from the decorating of boats and houses to the parade, reminded me of small town fourth of July celebrations in Maine.  The key difference was the religious focus of this celebration.  While blessings of the fleet are not an uncommon element of Maine coastal festivals, our fourth of July celebrations, lobster festivals and lobster boat races are primarily secular affairs. 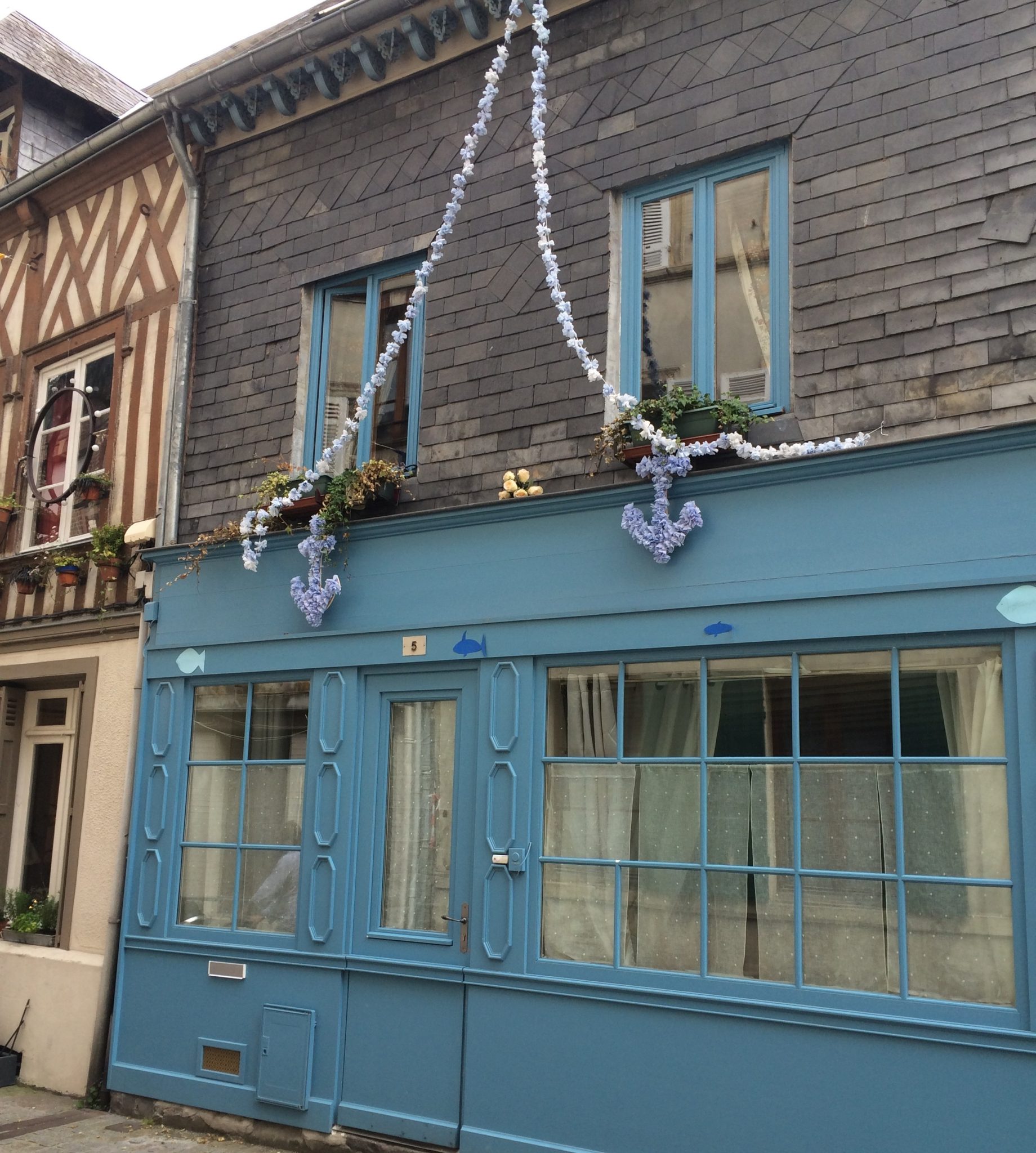 A Honfleur home decorated for the Festival of Sailors.

I left Honfleur so in love that I’m already planning a return trip.  If you have any questions about the town feel free to send me an email.

« The Five Prettiest Lobster Fishing Villages in Maine
The Secret to Selling Maine Lobster? It’s in The Story. »