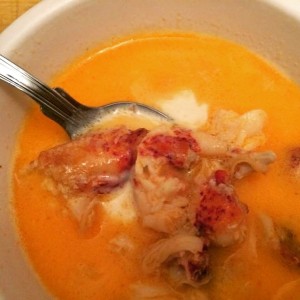 A steamy bowl of lobster stew.

Lobster stew can be made with just three ingredients – lobster, butter and milk.  I grew up on this simple version, made occasionally by my mother from left over lobster meat.

Simple seafood stews and chowders, as I wrote in my article on Julia Child’s lobster bisque, are staples in many homes and most restaurants along Maine’s rocky coast.  The famous chef Jasper White even described lobster stew as “mother’s milk” for Downeast families in his book, Lobster At Home. It is our ultimate comfort food.

Recently I have had the opportunity to experience and experiment with more dynamic versions of lobster stew, which use cream, stock and sherry to add richness and depth to the dish.  I have had the pleasure of dining at the Harraseeket Inn in Freeport and enjoying their award-winning lobster stew. It was so good it gave me goose bumps.  When I asked the waitress what the secret was to achieving such an exquisite taste she replied, ‘it’s all that sherry!’

I have also constructed my own version of lobster stew, inspired by various descriptions of the popular Jordan Pond House recipe. While stock and cream certainly contribute to the below recipe’s flavor, it is the sherry, in combination with the lobster, that plays the starring role.  Especially when you are working from previously frozen lobster meat as I often have to do, a healthy dash of sherry helps lift the flavor of the lobster and take the stew to a new level of lusciousness.

Adapted from the Jordan Pond House lobster stew recipe.
Ingredients
Meat of one small lobster (note: I had to work from previously frozen lobster but recommend using fresh Maine lobster if possible)
3 tablespoons of butter
2 cups of milk
1 cup of light cream
½ cup of sherry
1 tablespoon of stock or seafood base (I used some previously frozen leftover stock from a lobster bisque I’d made)
3 and ½ tablespoons of butter
white pepper
paprika
black pepper
salt
Directions
Cook the lobster. Remove the meat and cut it into bite-sized chunks.  Heat three tablespoons of butter in a frying pan. Add the lobster and seafood stock (or base) to the pan, sprinkle with paprika and sauté on a low heat for about 6 minutes. Add the sherry and cook for another four minutes. Add a dash of white pepper, salt and pepper then remove from the heat.
Add the milk and cream to a saucepan and cook under low heat until scalded (until tiny bubbles form on the edges of the saucepan but without letting the milk come to a boil). Pour the scalded milk/cream mixture into your saucepan of sauteed lobster (you may want to adjust how much of the mixture you use, depending how much lobster you have.  I didn’t pour in all my milk/cream mixture).
If time permits, let the stew chill in a refrigerator over night or sit in a double boiler for an hour or so to enrich the flavor (while I always use a double boiler to enhance the flavor of my lobster newburg, I ate this lobster stew directly after it was cooked and it still tasted amazing).
Enjoy!  If you would like to read about other classic lobster soup recipes, here is a lobster bisque recipe and here is a lobster bouillabaisse recipe.
« The 2015 Maine Lobster Boat Races Schedule
Frequently Asked Questions About Maine Lobster Fishing »