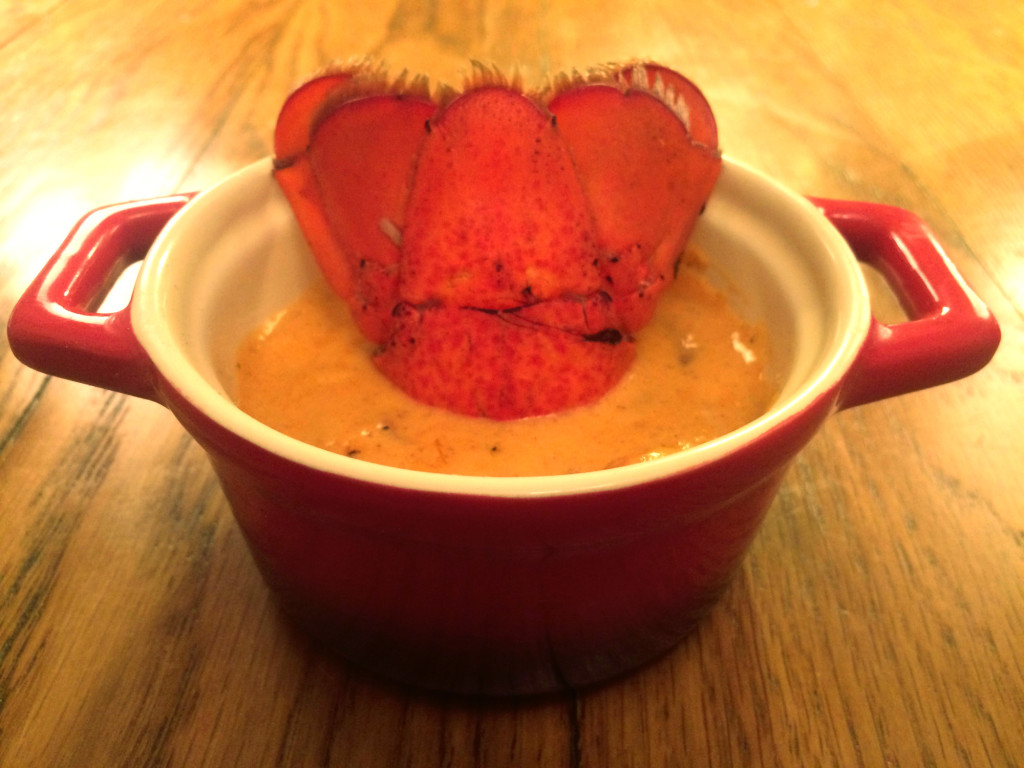 In the lead up to Valentines Day, my husband and I decided to test our cooking skills, and the strength of our marriage, by taking on our most ambitious lobster recipe to date – Julia Child’s Lobster Bisque.
I grew up in Downeast Maine, enjoying much simpler, heartier shellfish soups. Seafood stews and chowders are menu staples in most restaurants along Maine’s rocky coast. My mother used to make a delicious lobster stew, heaving with chunks of tender potato and fistfuls of freshly cooked lobster meat. The famous chef, Jasper White, described lobster stew as “mother’s milk” for Downeast families in his book,Lobster At Home. It is our ultimate comfort food.
Only in recent years have I come to appreciate the sublime joys of lobster bisque. It is arduous to make, expensive to order in a restaurant and lacking in the nourishing qualities of more sturdy seafood fare. But consuming a finely constructed lobster bisque is an almost ethereal experience.
Unlike stews and chowders, a bisque’s flavor comes from the shells of the crustacean, not the meat. A classic lobster bisque recipe requires you to first sauté and then simmer the shells to extract every morsel of flavor (bisque originates from the French words “bis cuites” meaning twice cooked). And perhaps the most classic lobster bisque recipe of all is that of the late, great Julia Child.
If you are looking for three hours of quality couple time, complete with a bit of live fire, have a go at Julia Child’s lobster bisque recipe. I can’t deny it is a laborious and messy undertaking but making the dish is also exciting and educational. Setting the lobster shells on fire and watching the flames leap up into the air is a pulse-racing exercise and Julia’s rigorous approach to cooking will leave you with an in-depth understanding of how to extract every last morsel of flavor from a lobster.
Below is my adaptation of Julia Child’s lobster bisque recipe. My husband and I found the process quite difficult to follow and we messed up a few of the steps so I have tried to simplify and clarify through my writing. If you make this dish, be sure to wear an apron, enjoy a bottle of wine as you cook and let me know the outcome. 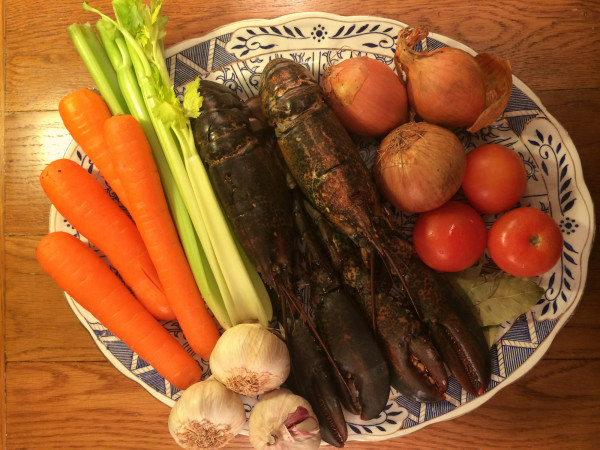 Step One – Preparing the Mirepoix
1 cup of mirepoix (equal parts of diced celery, onion and carrot)
2 tablespoons of butter
Melt the butter in a saucepan then add the mirepoix and cook slowly for six to eight minutes until the vegetables are tender and translucent but not browned. Once cooked you can transfer the mirepoix to a bowl if you wish or keep it in the pan. Note: Don’t wash the pan. In Step Four you will use this pan, including the remaining flavor from the pan, to cook the rice.
Step Two – Sautéing the Lobster
2- 3 fresh, uncooked lobsters, size 1 and ¼ to 1 and ½ pounds in size
2 tablespoons of olive oil
If you’ve purchased live lobsters, you can kill them instantly by plunging a knife into the head and chest of the lobster, Julia Child-style or by sticking the lobsters head down into a pot of steaming lobster, Christina Lemieux Oragano-style. If you choose the latter method, remember to wear an oven mitt when you put the lobster in the pot and don’t steam the lobster for more than three minutes.
Next, you must cut up the raw or slightly cooked lobster. Julia has a detailed method in her book but I will describe the approach I took. I tore the tail and claws from the body. I then split the chest in two with a large kitchen knife. I also split the lobster tail into two lengthwise sections with the knife. Once the lobster is cut up, set aside the claws and tails, with the meat still inside, for later use.
Fill the bottom of a casserole (we used a large Le Creuset casserole) with the oil and heat until the oil is very hot but not smoking. Add the lobster chests and legs and sauté, tossing and turning frequently for about 4 to 5 minutes until the shells are deep red in color.
Step Three – Simmering the Lobster and Picking out the Meat
Salt and pepper
6 tablespoons of cognac
1 and ½ cups of dry white wine
1 bay leaf
The mirepoix from Step One
4 small tomatoes, diced, with the seeds removed (Julia recommends peeling the tomatoes as well. We didn’t).
1 clove of garlic, mashed
A large pinch of cayenne pepper
(Note: Julia’s recipe calls for 2 tablespoons of fresh tarragon which we did not have/use) 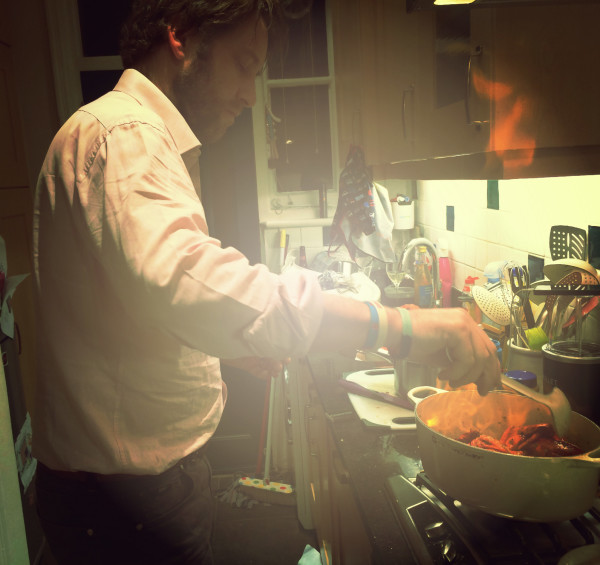 When the lobster chests and legs are sautéed, lower the heat slightly and add salt and pepper. Then pour on the cognac and ignite it with a match. This is the fun bit. When my husband lit the cognac on fire, flames leapt into the air and danced around the casserole. We continued to stir the lobster shells and shake the dish until the flames died down.
Next pour in the wine and add the bay leaf (and tarragon if you have some). Then fold in the mirepoix, tomatoes, garlic and cayenne. While it is not very clear in Julia’s recipe, to me at least, this is also the stage where you add in the rest of the uncooked lobster (the claws and tails). Once all the ingredients are added, cover the casserole and simmer slowly for 20 minutes. 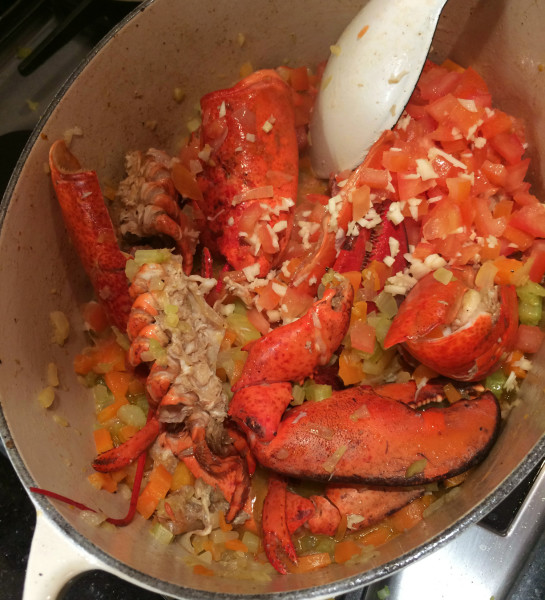 If you haven’t been wearing an apron up until now, put one on. This is the messy bit. When the mixture is through simmering turn off the heat, remove the pieces of lobster from the casserole and let them cool. You must now pick the lobster meat out of the shells, which are still coated in some of the sauce. Set aside the lobster meat (about a cup’s worth) in a bowl. Chop up all the shells into ½ inch pieces and set them aside in another bowl. Then pour all of the cooking sauce (the remnants of the mirepoix, tomatoes, etc) from the casserole through a sieve (to catch any remaining shell) and into the jar of a blender. This sauce will be combined with other ingredients in Step Five. Set aside the casserole but do not wash it.
Step Four – Simmering the rice
2 cups of canned clam juice (Note: we use Bar Harbor Foods clam juice, Julia’s recipe recommends 3 cups of fish stock or clam juice)
2 cups of beef stock
1/4 cup of plain white rice, raw (Note: we used 1 cup of rice, which is too much).
Using the saucepan from Step One, in which the mirepoix was cooked, bring the fish stock and beef stock to a boil. Sprinkle in the rice, stir then simmer for 20 minutes and set aside. Note: You can start Step Four while the lobster is simmering in Step Three to save yourself some time.
Step Five – Pureeing the rice and lobster meat with the lobster cooking sauce
Step Five is where things became a bit confusing for us. We had cooked too much rice and were bemused at what to do with it all. We also somehow missed that the lobster cooking sauce is supposed to be blended up with the rice and lobster at this stage. I have added some extra details to Step Three and Step Five, including changing the title of Step Five in this write up to make these points extra clear.
The correct approach to Step Five is to drain the rice (reserving the cooking liquid) and place it, along with one half of the cooked lobster meat, into the blender which already contains the lobster cooking sauce (the mirepoix, tomatoes, etc from Step Three). Once pureed, remove the mixture from the blender and place it back into the rice saucepan. It will be used again at the end of Step Seven.
We ended up blending a bit of the rice we’d cooked (without adding any of the lobster). A few steps later we mixed it with some of the lobster cooking sauce. We ended up saving all of the lobster meat for Step Seven.
Step Six – Lobster Butter
6 tablespoons of butter
The bowl of chopped lobster shells
Add the butter to the previously used casserole and heat until bubbling. Stir in the lobster shells and sauté for about three minutes, tossing and turning continuously. Then pour the mixture, including all the shells, into the blender and puree. You will need to stop several times and scrape the shells off the sides of the blender and back down into the blades. Puree for about five minutes.
Once the butter and shells are well mixed, pour the mixture through a sieve. You will need a very fine sieve to catch all the shells. Alternatively, you can use a pair of nylons to strain the butter from the shells. Then set the lobster butter aside in a bowl and discard the shells. The butter will be used in Step Seven and Step Eight.
Note: An alternative approach to making lobster butter, detailed in my book, How To Catch A Lobster In Down East Maine, is to first mix the butter and lobster shells in an electric mixer for one half hour then heat the mixture in a sauce pan and strain through a sieve.
Julia also includes an extra step here to ensure all the flavor is extracted from the blender jar, shells and sieve. This was a step too much for my husband and I so we moved straight on to Step Seven.
Step Seven – The Lobster Garnish
2 tablespoons of the lobster butter
2 tablespoons of Cognac (Julia’s recipe states you can also use dry white vermouth)
Salt and pepper
Heat the lobster butter in a frying pan until it starts to bubble. Add in the lobster meat and cook for about two minutes, tossing and turning and seasoning with salt and pepper. Pour in the cognac and cook until the liquid has evaporated then scrape the lobster into the saucepan (from Step Five) containing the rest of the soup mixture. Let it cool uncovered, then cover and refrigerate or freeze.
Step Eight – Final Flavoring and Serving
The remaining lobster butter
1 cup of heavy cream
Salt, pepper and cayenne if needed
Croutons or crusty bread
A few minutes before serving, put the soup back in a pot and bring it to a simmer. Flavor with additional salt, pepper and cayenne if needed. Just before serving, stir in the cream and remove from the heat. Then stir in the lobster butter, one tablespoon at a time. Finally, pour into bowls and serve with a side of bread or croutons.
I recommend serving this bisque with Veuve Clicquot champagne or a nice White Burgundy, such as a Meurault, Montrachet or Pouilly-Fuisse which will nicely compliment the rich, creamy nature of this dish (for more detailed wine recommendations, click here). 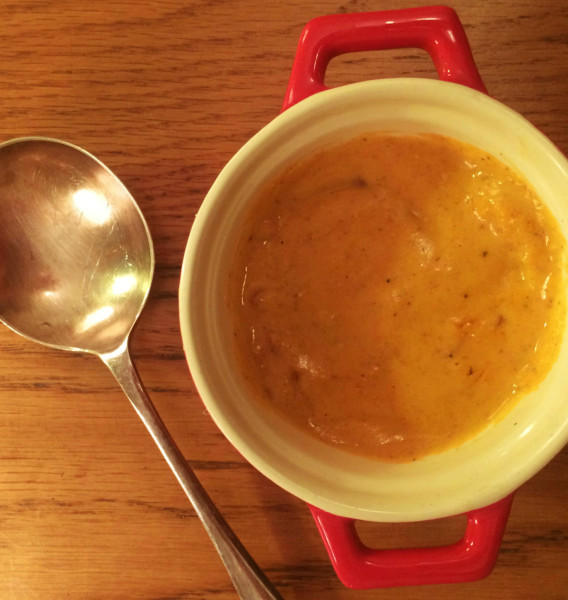 « The Benefits of Eating Lobster
Millennials and Maine Lobster. A Love Affair. »