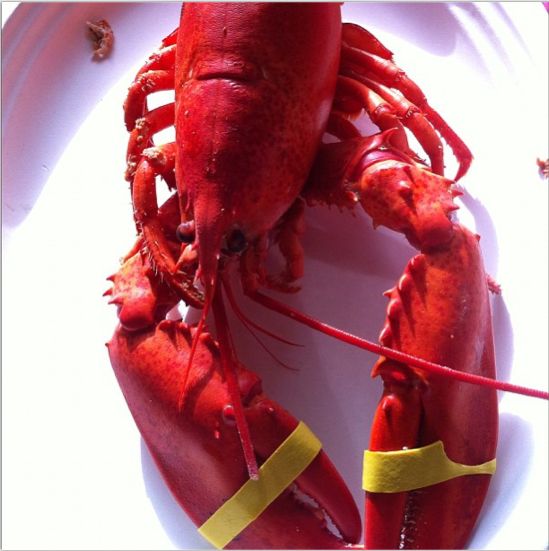 Yankee Magazine have unarchived an article from 1940, titled “Really Good Eating Places,” which lists the top New England dining establishments of the day.  One of the 31 restaurants on that list is the venerable Locke-Ober.   Though sadly now closed, Locke-Ober was know as one of the grandest restaurants in Boston (and perhaps the United States) during the 137 years it was in business.  And one of the most classic dishes you could get while dining at Locke-Ober was their Baked Lobster Savannah.

I have had both the privilege of dining Locke-Ober before it folded and of knowing one of the restaurant’s most prominent managers. This man used to summer in Cutler.  He was our neighbor and became a friend of the family.  I remember so fondly the wonderful stories he told me of the celebrities he rubbed shoulders with while managing the restaurant – JFK was a regular and they renamed their lobster stew in his honor. I was lucky enough to have this former manager of Lock-Ober’s prepare the Lock-Ober Lobster Savannah recipe for me him prepare me on several occasions.

While sadly you can no longer experience Locke-Ober’s Baked Lobster Savannah in the understated elegance of this historic restaurant, you can try to make it yourself with the below recipe, which comes via the New York Times.

Remove lobster claws and knuckles, crack them open and reserve meat. Using heavy kitchen shears, cut a long 1 1/2-inch- wide rectangle out of the top of each lobster body, extending from about 2 inches behind eyes to about 1 inch from tail. Keeping body in one piece, carefully pry meat from tail, and set aside. Remove any meat from body cavity, as well as the green tomalley (liver), and set aside. Rinse lobster bodies and reserve.

Preheat oven to 400 degrees. Cut lobster meat into 1-inch chunks, and set aside in a bowl with tomalley. Place a large sauté pan over high heat, and melt butter. Add mushrooms, and stir until mushrooms begin to release their juices, 1 to 2 minutes. Add shallots and red pepper, and stir until liquid has vaporated and vegetables begin to brown.

Remove pan from heat, and add brandy and sherry. Carefully touch a lighted match to mixture to flame it. When flames subside, place pan over medium-high heat. Add heavy cream, paprika and salt and pepper to taste. Add lobster meat and tomalley to pan, and stir. Add lemon juice, and adjust seasonings to taste. Allow sauce to simmer until lobster is heated and sauce is slightly thickened, about 5 minutes.

Place reserved lobster bodies in a large baking pan. Place equal portions of lobster mixture in cavities of
bodies, and sprinkle with Parmigiano-Reggiano. Bake until cheese is lightly browned, 2 to 3 minutes. Serve immediately.