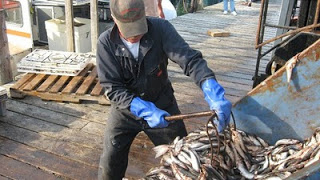 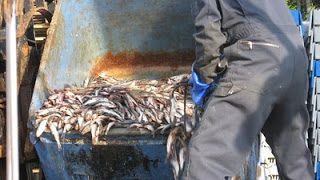 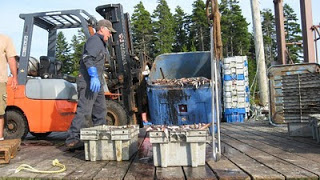 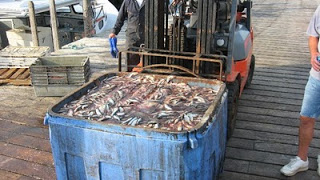 One of my cousins took these great pictures of my family in the process of “loading lobster bait” which has inspired me to write a short post on lobster bait in general and the Maine lobster bait situation for 2010. These are some of the first really good pictures I’ve seen of my family loading lobster bait. It’s not the most glamorous part of lobster fishing and one that you wouldn’t think to photograph – unless, of course, you’re a tourist or a “flat lander.”

Lobster bait is primarily made up of herring. It’s typically delivered to the fishing wharves on a big eighteen wheeler and from there it’s loaded into blue plastic totes, which you see in the picture. The bait is then salted (to preserve it) and stored in a shed on the wharf until needed for fishing. Once per week – usually on a Sunday afternoon before the next week’s lobster fishing begins – my family and their crew remove the totes of bait from the shed with a forklift, which you can see in one of the pictures. The totes of bait are brought down to the end of the wharf where the lobster boat is docked. The lobster bait is then scooped out into smaller totes (you can see the smaller totes in the top picture) and heisted down onto the boat where it’s stored under the stern. When the fishermen go out to traps the next morning, they’ll take one tote out at a time and use it to bait their traps.

Last fall I wrote about the possibility of a lobster bait shortage in 2010. Unfortunately, there have been some restrictions around how frequently the herring fishermen are able to fish this year which has driven the price of bait up considerably. In fact, the price for a bushel of bait has gone from $16 to $24 this season. This does not include the price of the salt (needed to preserves the bait) which stands at $2 per bushel. To put this in context, it will take a fisherman roughly 36 bushels of bait to get through 800 traps. Assuming the lobster fisherman is fishing his full 800 traps a week, it means his bait expenses will be over $900. And that’s just one of his expenses. You need to add fuel, stern man wages and other costs on top of that before you get to the total lobster fishing expenses for a single week. Thankfully, the lobster fishing thus far this season has been good which means most fishermen are managing to come out ahead after expenses have been paid.

« What happens to lobster boats in the winter?
How To Catch A Lobster In Down East Maine »