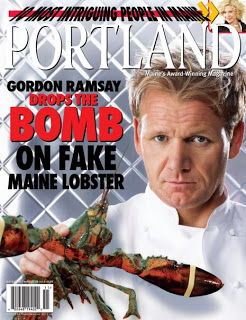 A good friend of mine and fellow Mainer pointed out a great article in the November issue of Portland Monthly magazine in which Gordon Ramsay sings the praises of Maine lobster and bashes restaurants that serve counterfeit Maine lobster (an issue I wrote about in an earlier post). Apparently, Ramsay caught out a New York restaraunt owner for passing off Canadian lobsters as Maine lobsters and went ballistic on his TV show, “American Kitchen Nightmares.”

I’ve not been able to find the video footage online, but the Portland Monthly article has a full transcript and I’ve included that below. In addition to explaining why Maine lobster has such a great reputation, Ramsay also talks about his favorite way to prepare Maine lobster – a clam bake with lobster, clams, mussles and corn on the cob. Enjoy!