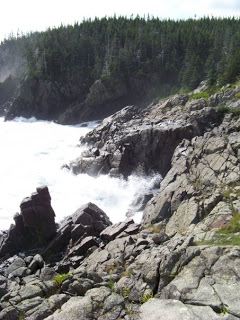 I’m pleased to report that Hurricane Bill did not bring too much damage to the fishermen of Cutler.  As my mother wrote today:

“We certainly kept a weather eye out for which track hurricane Bill would take.  We were fortunate that it veered off from the coast.  We had really high tides this weekend that would have been really bad for us if it had been closer.  It did give us quite a storm surge and huge waves on the outer shore… I’m sure that the fishermen that have been fishing on the shore had damage to their traps.”

If a hurricane comes during the high tides, it can really do some damage to the lobster fishermen’s traps, boats and wharves.  Leading up to a big hurricane, the fishermen make sure to check the lines they use to moor their boats, replacing or reinforcing any worn rope or old anchors.  If a boat breaks loose from its mooring in a hurricane, it means bad news not only to the boat owner, but also to all the surrounding boats, which it can smash into.  I remember various hurricanes growing up and how my father would be up throughout the night, going down to the harbor to check that his boat and the other boats in the harbor were safe.
The fishermen usually haul their skiffs up onto the floats at the end of their wharves and flip the skiffs over so they don’t fill up with water.  While skiffs are often equipped with scupper plugs at the stern to allow water to drain, the harsh rains of a hurricane can sometimes be too much for a skiff and sink it.
Lobster fishing wharves are another area which must be looked after leading up to a hurricane. Often the fisherman keep extra traps, buoys and rope stored on their wharves and these items must be removed or secured so they don’t get blown away.  In extreme cases, when strong hurricanes hit during high tides,  fishermen will park their trucks on the wharves to keep the strong seas from lifting the planks off.
Finally, many fishermen will shift their traps away from the shore a bit, where the strong seas cause the most damage.  If you’ve ever walked along the shores of Maine and spied a mangled up wire trap or a buoy stuck way up high in some ledges, it was likely the result of a trap being left too close to shore during a hurricane.
« Lobster and corn bisque recipe
More reflections on Maine lobster boat racing »